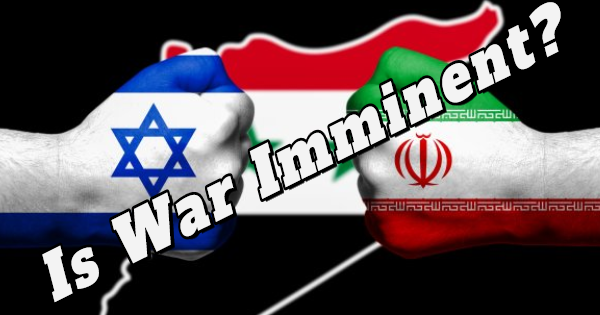 This post is to give readers an update on the extent to which Mideast events are sliding toward an Israeli-Iranian war. The current chaotic situation in Syria also adds fuel to this potential fire. The first link is an analysis by an Israeli media source, albeit an apparently leftist one. This analyst seems to fear Iran more than most Israelis. If Iran was as powerful as this analyst asserts, there is no reason why Iran has not already launched an all-out war to “wipe Israel off the map.” This analyst is also anti-Trump. Nevertheless, I’m enclosing this piece as an example of leftist thought inside Israel. It is worth noting the leftist parties did terrible in the recent Israeli elections, so the majority of Israelis do not share this analyst’s views.

The second link offers a more robust view of Israeli options at the current time. It cites Israeli Prime Minister Netanyahu as dropping hints that an Israeli preemptive strike vs. Iran is drawing near due to the increasingly warlike actions of Iran to encircle Israel and prepare it for an Iranian death-blow. The third link cites the Iranian Air Chief as saying Iran is “ready for a fight,” and it focuses on Israel’s willingness to acknowledge how extensive the Israeli-Iranian warfare already is within the Syrian borders.  It cites a top Israeli military official as saying that Israel has launched “thousands” of strikes into Syria in recent years. Let that statistic sink in. That Israel has launched an unspecified number of strikes numbering in the thousands indicates a high level of Israeli-Iranian conflict already exists.

Iran has been arming Hezbollah, Syria, and Hamas to join it in a death-blow attack vs. Israel and the Israelis have been destroying Iranian military assets as soon as they reach Syria to prevent such an attack. The world’s masses have little appreciation of how extensive the Iranian-Israeli combat already is inside Syria and near Israel’s northern border region. The fourth link reports that it is not just the Israeli air force launching these thousands of strikes. The Israeli navy has participated in military strikes vs both Hezbollah and Iranian targets inside Lebanon (and perhaps Iranian assets inside Syria if they are within range). As an example of the spill-over effect of this warfare, a Syrian missile recently went off course and landed in Cyprus. The fourth link acknowledges only “hundreds” of Israeli attacks, and it describes a major Israeli attack that took place in July of this year. The fifth link details an Israeli attack that occurred in August when Israel launched a preemptive attack to stop a planned Iranian “explosive drone” attack vs Israel. Netanyahu is quoted as saying Iran has no “immunity” anywhere from Israeli military attacks.

So, when people speculate about when an Iranian-Israeli war will occur, they fail to note that such a war has already been going on for some time…in Syria and Lebanon. What they really mean is when will this war expand to include a wider area in the Mideast. It could erupt into a major war at any time. The final link offers an update about the political paralysis inside Israel at this time in forming a new government. Given the parties and personalities involved, the Israelis may have to go to another election if no one can form a coalition government at this time. I do have a concern the Iranians may see a time of Israeli governmental paralysis as an opportune time to strike Israel. However, regardless of who is in power in Israel, the dynamics of how Israel needs to defend itself powerfully during a major war in order to survive are unchanging.

I’d like to offer some commentary about the state of the Iranian-Israeli conflict at this stage. My first observation is that the Israeli Air Force seems to be almost immune to the efforts of advanced Russian-made Syrian air defense systems that are being used by the Iranians and Syrians. This has to give Iran some pause about whether Iranian air defenses will do any good against an Israeli airstrike if a wider war occurs. It also has to worry the Russians that their advanced air defense systems are having so little effect vs. the western technology in the Israeli warplanes. A second observation is that President Trump’s “abandonment” of the Kurds may have been an unappreciated strategic move. It has moved a number of Kurds near the Turkish border out of harm’s way and the US military has not actually withdrawn from Syria yet. US military forces have taken command of the Syrian oil fields and press reports state the USA is sending “mechanized” ground forces to the oil fields. The term “mechanized” can include tanks, Bradley Fighting Vehicles, etc., but it certainly includes anti-armor and anti-aircraft weaponry.  Also, the Kurdish Autonomous Zone in Northern Iraq is apparently in no danger from any attack by the Turks. It does seem Russia has no desire to see Turkey invade a large swath of the territory of its ally, Syria, so Russia and the USA may actually be cooperating behind the scenes to limit and deconflict this situation so Turkey could not turn the situation into a wider invasion. Keeping American ground forces in eastern Syria also creates a blocking force between Iran and Syria to prevent Iran from reinforcing the Syrians or Hezbollah if a wider war erupts. Also, the American-Kurdish cooperation in eliminating the leader of ISIS in a commando raid shows that Kurdish-American military cooperation is still continuing.

Furthermore, it needs to be stressed that Iran and Israel are in unequal strategic positions. Iran has a large hinterland, but no nuclear weapons…yet. Israel has no hinterland but it does (by all accounts) possess plenty of nuclear warheads. Given this situation, the strategic options are clear. Israel cannot absorb an all-out Iranian-Syrian-Hezbollah first-strike with 100,000 rockets and missiles being fired into Israel (from Hezbollah’s positions alone). Israel’s strategic position almost requires it to launch a preemptive attack vs. Iran. If Hezbollah launched all its missiles and rockets, Israel may have no choice but to hit southern Lebanon with a series of low-kiloton nuclear weapons to “sanitize” that region so it never again threatens Israel. Israel would do all it could to defend itself with conventional weapons, but if the situation becomes an existential threat to Israel, Israel will use every weapon in its arsenal. If such a war occurs, I expect Israel to hit all major Iranian military, nuclear and oil-shipping facilities. Israel is a small nation that is not equipped to fight a prolonged war. It would strike Iran very hard and end the war quickly, in my judgment.

If such a war erupts, I fully expect Israel to emerge the winner. Iran’s goal of “wiping Israel off the map” will fail. We have God’s promise on that outcome. Genesis 49:8-10 and Zephaniah 2:1-10 both prophesy doom and destruction to the enemies of the Jewish nation in the latter days (notice these prophecies refer to the Israelis as “Judah,” not “Israel”). Also, the Israelis will be heavily involved in the cataclysmic battles of World War III, as Zechariah 142:1-9 and 14:1-14 confirm. Notice these last two prophecies acknowledge the Israelis (like all nations) will suffer significant damage and losses, but God will rescue them so they will neither be defeated nor “wiped off the map.” Remember the scene in the famous movie, Raiders of the Lost Ark, where a group of Nazi troops died when God smote them with having their flesh melt off their bodies while they were still standing? Zechariah 14:12 foretells God will do exactly that to an entire enemy army that is trying to conquer Jerusalem during World War III.

If a major Israeli-Iranian war erupts and the Jewish nation has to resort to using nuclear weapons to preserve itself, it will have a tectonic effect on global geopolitics. One effect will be that the Israelis will be seen as a major global power which is willing to use nukes as a last resort. It may even lead to a global conference to implement massive disarmament, ban nuclear weapons, etc. Many outcomes now thought unthinkable would then become real possibilities. A global power might come on the sene which declares Jerusalem to be an “international city,” and then other prophecies about an end-time beast and false prophet figure may be fulfilled. A Mideast war could erupt at any time. Indeed, given the years of conflict between Israel and Iran inside Syria and Lebanon, it is hard to visualize such a major war not erupting in the future.

For more in-depth biblical perspectives on this current crisis and how World War III will unfold, please read my articles, Are We Living in the Biblical Latter Days?, Four Reasons the Jews are Judah, and What Ezekiel 38-39 Reveals about a Future World War III.