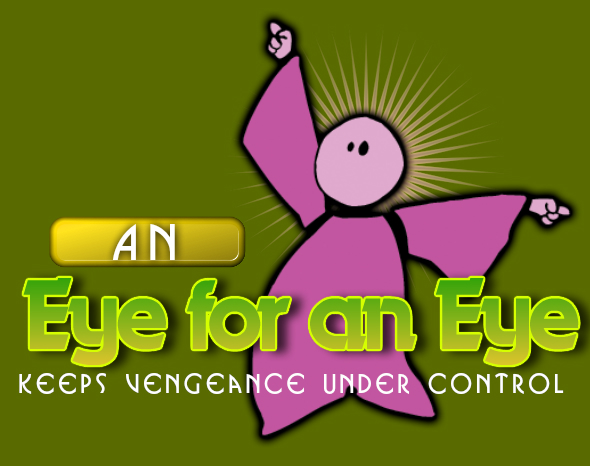 Some people have criticized the “God of the Old Testament” for being too harsh in his commandments and rules. One of those rules often cited is the command in Exodus 21:24-25 that punishments be implemented on an “eye for an eye, tooth for tooth, hand for hand, foot for foot, burning for burning, wound for wound, stripe for stripe” basis. Some have found this to be a harsh standard that did not allow for mercy. In this post, I’d like to point out the realities of ancient societies in biblical times that makes readers realize that God’s commands in Exodus 21:24-25 were, in fact, a merciful standard for those times. What God was doing in that command was actually limiting punishments to “fit the crime.” God was specifying that, as a punishment, you could only take one eye from someone who had caused another person to lose an eye if a fight occurred and one person had an eye gouged out and became blind. God’s command specified you could only take one eye from the offender–you could not take away both eyes. Or authorities could only wound someone in a punishment to the level that they had been first wounded by someone else in some kind of infraction or crime. God was forbidding excessive punishments in Exodus 21:24-25. Let’s see a few examples from the Bible that illustrate this point.

When David was being hunted by King Saul and was insulted by Nabal, a churlish person who didn’t grasp that David and his band had actually protected him, David was infuriated. He took some of his warriors to vent his rage on Nabal and his family and servants. David’s wrath was assuaged by the ingratiating, humble approach of Abigail, Nabal’s then-wife, who understood the situation and she appeased David’s wrath from being implemented. The account is found in I Samuel 25, but in verses 22 and 34, David acknowledged that his murderous intention had been to “kill every male” in Nabal’s compound. This “over the top” reaction for an insult or injury was very common in ancient times. Kings, leaders and authorities of all kinds in ancient times would have a “kill everyone” or “kill all the males” response to crimes or offenses. In the northern kingdom of Israel (the ten tribes of Israel), assassinations and palace coups became more common as people coveted the kingship. In I Kings 16:8-12, such an assassination occurred and the successor killed off all the male relatives of the former king and even the males of his closest friends! King Ahab and Queen Jezebel were a particularity evil “power couple” that reigned in ancient Israel during the time Elijah was a prophet. Ahab and Elijah finally had a face-to-face encounter and Elijah told Ahab that God’s judgment against Ahab would be that all the male descendants (i.e. heirs to the throne) of King Ahab would be killed (I Kings 21:20-25). God was so sick of Ahab he decreed that Ahab would have no possible heirs to the throne that would remain. God can get angry too, but he is the creator of all life so he always has a sovereign right to take it. God has the perfect ability to balance justice and mercy in his decrees and knows which option is the better course of action. Humans lack that divine ability, and can typically go to excess in executing penalties or vengeance. Today, modern western societies have codified due process rules for handling criminal punishments or vengeance, but there are still parts of the world today where clan or family blood feuds can occur. In ancient times, “due process” was rare.

Another example of expanded implementation of a king’s justice or wrath is found in the book of Esther. This book is set in the royal palace intrigue of the Persian Achaemenid empire. Haman was a king’s counselor who hated the Jews, and he concocted a plot to have them all killed. Instead, the book of Esther relates that the Jews emerged victorious and Haman was killed by the Persian king. The Persian king had the same “kill off all the males” attitude that was present in ancient Israelite society when vengeance was implemented. Esther 7:9-10 and 9:10-14 record that not only was Haman hung on his own gallows, but his ten sons were killed as well.

Blood feuds were common in ancient times. If one family or clan had a member killed by someone in another family or clan, a cycle of blood vengeance and excessive retaliation was often precipitated. In modern times, we have the legendary blood feud of the “Hatfields and McCoys” in the Appalachian Mountain region that is well-known in American history. It lasted for generations, and a cable-TV series was even based on this feud.  [As an aside, I have a personal connection to this feud. My great-grandmother was a McCoy and I had ancestors in Appalachian Pennsylvania and West Virginia who fought for the McCoys.] Thankfully, in America, such feuds do end. I think the clans now hold joint picnics!

Massive “overkill” was common in ancient times even within families. One example of this was in the family of Gideon. After delivering Israel’s tribes from oppressors and becoming a Judge over the tribes, Gideon had many wives and begat 70 sons via those wives and one son via a concubine. The son of the concubine was bitter about his reduced status in the family and and contrived to kill all his half-brothers. After Gideon’s death, he and his co-conspirators did kill 69 of his half-brothers, but one escaped to live to see the half-brother killed later (Judges 8:29-9:57). Secular history is also full of stories about murderous, “over-the-top” killings that punished far more than the actual persons who committed an act of violence or vengeance. The Assyrians did mass executions by impaling and other cruel means to intimidate their foes, the Romans did mass crucifixions to intimidate populations into submission, etc.

In light of this brief recollection of blood feuds and over-kill in implementing judicial or extrajudicial vengeance and punishments in ancient civilizations, I think it can be clearly seen that God was actually limiting permissible punishments for all kinds of injuries and infractions in his “eye for an eye” standard in Exodus 21:24. What God did in Exodus 21:24 was to codify in ancient Israel the modern principle that “the punishment must fit the crime.”