AMERICA’S DANGEROUS DEPENDENCY ON CHINA FOR OUR MEDICINES 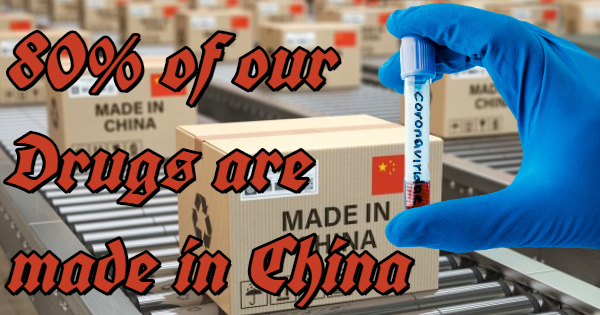 The ongoing coronavirus pandemic (it is one whether the WHO admits it or not) is highlighting a massive flaw in American corporate policies as well as a longstanding governmental indifference to a major national security risk. It is America’s dependence on factories located in China for almost everything we need and consume. This post will focus on the USA’s dependence on China to make almost all the medicines, pharmaceuticals, health care products, etc. that our nation needs for our health care system to function. The coronavirus outbreak has pointed a glaring spotlight on this major problem.

The first link warns about America’s dependence on Chinese factories for the medicines used in the USA and further warns that this puts China in a position to blackmail the USA into making decisions favorable to China in order to continue to receive the medicines we need. It notes that “80% of present medicines consumed in the United States are produced in China,” and quite rightly adds that this situation is “more than alarming.” It lists categories of drugs that are made in China, and which could be cut off from the American public in a national crisis or any warfare between the two nations. This article notes that even vitamin supplements such as Vitamin C which many people consume can be made in China.

A list of some of the medicines used by many Americans but which are made in China is contained in the second link. It includes 95% of ibuprofen, 70% of acetaminophen, 40-45 % of penicillin, etc. Clearly, America is dependent on Chinese factories for huge percentages of many commonly used over-the-counter medicines as well as prescription drugs. The production facilities in which China produces these medicines can have dubious production standards as this link also reports that FDA inspectors from the USA have found “significant deviation from current good manufacturing practice” in Chinese facilities. The link also quotes one expert as warning that China can withhold medicines from America as an “act of war” in the future. That fact should be evident to everyone.

It gets even worse. The third link reports that there are “squalid conditions in many Chinese drug factories” and that the FDA rarely, if ever, inspects very many of them. It cites there were recalls of Chinese-made blood pressure medications after 81 Americans died after taking them and that such medicines were found to be contaminated with “jet fuel contaminants.” It also discusses one medicine, heparin, which the Chinese manufacture by using the “mucous membranes of pig intestines.” Does that thought upset your stomach as much as it did mine? The link also adds a stunning observation  that the “US factories no longer make generic antibiotics.”  It reports that the Trump administration is calling on US companies to make their products at home in the USA. Finally, there is an American president with some pro-American common sense. The USA is very over-dependent on China not only for medicines, but for consumer electronics, household products, rare earth, and all kinds of items. Republican and Democrat administrations and Congresses, as well as hordes of American companies, are to be blamed for allowing this dangerous dependency on China to develop over the last few decades. It is now an urgent national security need to bring as much factory production back to the USA as possible…as soon as possible. The fourth link discusses the now-obvious dangers of the world being so over-reliant on Chinese production facilities. The coronavirus epidemic within China has shut down many of its production facilities and there are reportedly major problems in getting Chinese factories back into production. This fact has caused the stock market to decline all over the world as companies are at risk of having to shut down assembly lines and product lines if they lack components made in China. The difficulty of China’s being able to restart production facilities also argues that the coronavirus has sickened and killed more Chinese workers than have been officially reported.

In war or confrontation, China could withhold any range of Chinese-made products that it desires to do so. It could also put minute amounts of poisons into medicines or other consumer products sent to America to gradually sicken and weaken the American population. I find it more than disturbing that the American military, which may have to fight China someday, will be treating its wounded soldiers with antibiotics and medicines made in China. Even as the USA, under President Trump, becoming energy independent and is no longer dependent on foreign nations for oil, we need vigorous programs to also make the USA independent of other nations in all finished products and raw materials with national security importance.

Given the fact that biblical prophecies warn us that a war between the Western world and its allies on one side and Russia, China, Iran and their allies on the other side is inevitable, all of the above national security risks will become obvious when such a war begins. If you would like additional information about how this final climactic war will begin and end, please read my article, What Ezekiel 38-39 Reveal about a Future World War III. Additional articles that will make this article more understandable are my companion articles: The USA in Bible Prophecy and Are We Living in the Biblical Latter Days?