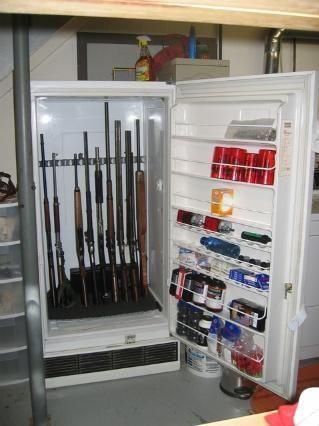 This is a post which, I think, non-American readers of this blog will find both fascinating and bewildering. It addresses and documents the unique attraction of Americans to gun ownership. Gun-ownership and gun-rights are deeply ingrained in the American ethos, and they are preserved in our US Constitution as a fundamental and basic right of all American citizens. The governing elites of the USA seem to hate the Second Amendment and the liberal media attempts to undermine gun ownership whenever it can, but the American love affair with guns just keeps growing stronger. The first link shows Americans believe, by a landslide 63-30% margin, that having guns in homes make them safer. They are right. If a criminal is going to break into a home, he/she isn’t going to want to invade the home of an armed citizen. Doing so could be lethal for the criminal. The second link affirms that the number of Americans supporting gun rights is growing steadily. You can be sure that politicians read those polls and take positions accordingly.

The summer of 2015 has seen a record rate of gun acquisitions by America’s private citizens. The third link reports that from June-August, 2015, 4.8 million FBI background checks were performed for individual Americans buying guns at licensed gun-sellers. The link notes that each background check represents a request to buy firearms–the number of firearms requested in each background check could be just one firearm or it could be a lot of firearms. I think we can assume that while most of the requests involve one firearm, a significant number of those requests will involve the purchase of multiple guns. This means that perhaps those 4.8 million background checks for gun purchases could translate into an average of 1.5 guns per request. Based on that estimate, it means private American citizens bought perhaps around 7 million new guns in just the last three months. Obviously, a gun is just a club or big paperweight without ammunition, so one can only imagine how many tens of millions of rounds of ammo must have been bought with those purchases.

Oddly, the most effective gun salespeople are liberal politicians and media commentators who regularly scream for gun control each time a gun is misused by a criminal. Ham-fisted actions (or fears of such actions) by the US government also stimulate waves of gun sales. I recall during the President Clinton administration, the US government decided to barbecue a number of American citizens in a property in Waco, Texas owned by a religious cult–the Branch Davidians. Even if they were a cult, they did not deserve to be fried to death by a government decision. Also, during the Clinton administration, an unarmed mother was inexplicably killed by a US government sniper while holding her baby in a doorway of her home (the Randy Weaver/Ruby Ridge incident). The actions of the federal government outraged millions of Americans and they went on a gun-buying spree and even formed citizen militias due to growing fears of the US government. A US Senate Committee held hearings on the killings and the testimony of Randy Weaver can be found in the fourth link. Since it was a formal hearing by the US Senate into the conduct of federal agencies, I believe it likely that the fourth link is one of those few cases regarding internet links when you are reading testimony that is “under oath.” I assume Mr. Weaver would have been sworn in as a witness before giving his formal testimony.

When Republicans are presidents, they are perceived as being pro gun ownership and there is less of a rush to buy guns. However, Democratic presidents can’t seem to help themselves. They eventually do things that stimulate fears of the government in millions of Americans, who then buy millions of guns out of fear that the US government will try to seize their guns or make it harder to buy them. CNN-News is also a preeminent gun-seller. Whenever there is a gun crime that suits their politically-correct agenda, CNN opts for “wall-to-wall” coverage of every nuance of the crime, ad nauseam for days. CNN seems to care little or nothing about the hundreds of black-on-black gun killings in Chicago, which has some of the strictest gun control laws in the nation. The city of Chicago is a virtual “poster child” for the self-evident truth that criminals don’t care about gun laws–they will kill with guns whether they are illegal or legal. Now back to the latest gun-buying spree by US citizens. What triggered it? [Pun intended.]

The well-known gun-control stance of the Obama administration creates an atmosphere where any incident or report can create a gun-buying spree. The fifth link cites an incident where a crowd of citizens in Idaho gathered to prevent a feared seizure of a US military veteran’s guns by federal officials. The sixth link reports that a poll showed a plurality of all Texans feared that a domestic military exercise (called Jade Helm) in August-September in several Southwest American states was a prelude to the Obama administration attempting to either impose martial law on Texas or seize Texans’ guns. Don’t laugh. The poll shows that 31% of Democrats in Texas shared that fear. Texas has a unique situation shared by no other state. It was not an original state and it did not join the USA via the territorial process. It was briefly an independent nation and joined the USA via a treaty of merger. The sixth link also shows that even the Governor of Texas had fears about the intentions of the federal government and had the Texas State Guard monitor the federal troops during the exercise. There were numerous alarmist emails circulating throughout the USA re: the Jade Helm exercise and its existence doubtlessly induced many Americans to buy guns and ammo due to increased fears of the US federal government. The seventh link reports that the Obama administration is also attempting to use even the Social Security administration as a vehicle to limit Americans’ gun-ownership rights.

Non-American readers of this blog must marvel that Americans bought so many millions of new guns in just three months. If 5-8 million guns were bought by private citizens in most nations of the world in just three months, it would be electrifying news. In America, it’s “no big deal.” However, this is a record gun-buying spree, even for America. No one really knows exactly how many hundreds of millions of guns are owned by American citizens. Obama’s policies and actions are surely stimulating many of these sales. I’ll share a bit of humor with you on this subject. I heard a joke years ago about gun ownership in Texas. It went something like this: “Question: In Texas, What do you call a person with 15 guns and thousands of rounds of ammo? Answer: My neighbors.” That joke also highlights the reality of the gun-ownership situation in many states in the USA.

I’ll close with a biblical observation. Ezekiel 38-39 prophesies that Russia, China, Iran and their allies will attack the people/land/”house” of Israel in a great war at the end of our latter day period of time before Divine intervention imposes the Messianic Age. Ezekiel 38:21 foretells God will call on the Israelites of all tribes to fight back against this invasion with their weapons. Obviously, in order to do so, the citizens of an attacked nation can’t be disarmed. They have to have ready access to a lot of personal weapons to fight back at an instance’s notice. I know of only two nations among the modern Israelite nations who could currently do that: The USA and the Israelis. However, Ezekiel 38-39 cannot possibly apply to the Israelis because the Bible consistently refers to the Israelis/Jews as “Judah” in the latter days, not as “Israel” (see Zephaniah 2 and Zechariah 12 and 14). It is the nations of the modern ten tribes of Israel who the Bible refers to as “Israel,” and they are not hard to locate in the modern world if one has read my books and looked at world history truthfully. Readers can read my free article, The USA in Bible Prophecy, for a brief overview of the comprehensive evidence presented in my books about the migrations, empires and modern locations of the ten tribes of Israel throughout history. Their locations and heritage is the greatest overlooked reality affecting and controlling modern geopolitics.

The USA is the most powerful of the modern nations descended from the ten tribes of Israel, and the USA is the prime enemy and likely target of the Russian-Chinese-Iranian alliance, as I’ve often written about in the past. Do the citizens of the USA have ready access to a lot of personal weapons to resist an invasion of their homeland? The answer is a resounding:  “Yes.” The prophecy in Ezekiel 38-39 about our latter days was inspired by God circa 2500 years ago. Circa 2700 years ago, God inspired Isaiah 41:21-26, which cites God as challenging all mankind to look at his ability to fulfill his prophecies as a proof of his invisible reality and sovereignty. I think God had the eventual fulfillment of Ezekiel 38-39 in mind when he inspired the writing of the US Constitution. That is why, I believe, the USA has the Second Amendment to its Constitution.

There is an anecdotal report that at the beginning of World War II, Japanese Admiral Yamamoto said: “You cannot invade the mainland United States. There would be a rifle behind each blade of grass” (last link). If he did say it, he was very nearly right. I’ll leave you with the thought that Americans likely now own at least 100,000,000 more guns than they did when Admiral Yamamoto reportedly made his famous quotation.