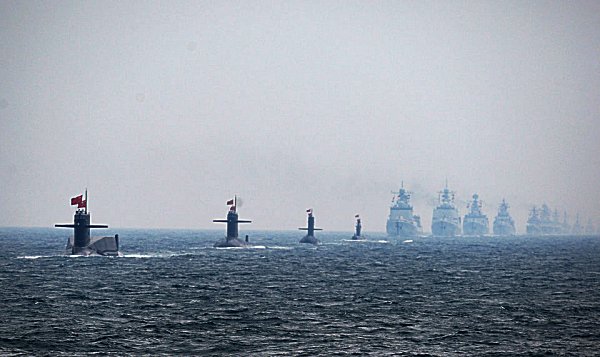 Earlier this year, China had its navy conduct maneuvers in the Taiwan Strait that separates Communist China from Taiwan. One exercise lasted a week and another included firing with live ammunition (first link and second link). That this was an intimidating military message from China to Taiwan that was obvious and impossible to miss. China considers Taiwan a rogue province, but Taiwan is actually the last geographic remnant of the Nationalist Chinese government which governed China during World War II and was one of the initial permanent members of the UN Security Council. China would like the world to forget those facts. Taiwan has every right to feel threatened by China, and former US President Obama kept Taiwan at arm’s length and did little to help Taiwan defend itself.

Under President Trump, US-Taiwanese relations have warmed considerably. In both 2017 and 2018, the Trump administration approved major sales of badly-needed military weaponry to Taiwan (third link and fourth link). Additionally, Trump sent a warning message to China by greatly upgrading the US Consulate in Taiwan to become a de facto, fortified US Embassy (fifth link). This action comes near to restoring full diplomatic relations between the USA and Taiwan. This greatly angers China as it intends to eventually absorb Taiwan into itself. Previous US presidents have accepted the “one China” policy which Chinese leaders demanded of US presidents. President Trump clearly does not feel bound by the obsequious actions toward China by previous US administrations.

Someone may be about to “do something about it.” That person is the US Commander-in-Chief, Donald Trump. There are reports that Trump will instruct the US military to conduct naval and air exercises in the same Taiwan Strait in which China conducted military exercises earlier this year. The seventh link offers details about this possible action, which has apparently not yet been finalized. Trump was surely angered when China recently had one of its warships nearly create a military incident between it and a US Navy ship in the South China Sea. The Chinese warship came close to ramming a US Navy warship (eighth link). If the USA does conduct military exercises in the Taiwan Strait, the South China Sea or the East China Sea, I suggest that a wise course of action would be to invite ships and planes from other nations in the Pacific Rim region who are also concerned about China’s militarism to join those exercises. China might decide that a limited war with the USA in the Taiwan Strait is a good place to start a regional war because it is so close to Chinese territory that China can bring many military assets to bear in such a location. However, China may not want to start a regional war against an entire range of Pacific nations.

The final link details a story about the US-Chinese confrontation from the perspective of, in my opinion, the Deep State–the same globalists who did nothing while China made a power grab to seize control of the South China Sea, a major maritime transit point for global trade. The globalists dismiss Trump’s plans as mere “bluster,” and urge Trump to “accept a new reality” in the region vis-à-vis China as no major US interest is directly at stake. Let’s translate this globalese chatter talk into words we can understand. The Deep State globalists would like Trump to emulate previous US globalist presidents and essentially accept defeat at the hands of the Chinese. They would like Trump to accept the same gradual surrender of Taiwan and the South China Sea to China that previous US presidents had essentially accepted. One thing is very clear to me from Donald Trump’s presidential campaign and his first two years as US President. Donald Trump does not accept defeat. I think Trump’s policy is that China will not have sovereignty over Taiwan or the South China Sea on his watch. If Trump sends the US Navy into the Taiwan Strait in a major military convoy or exercise, he is sending China an unmistakable message that any effort by China to seize control of either Taiwan or the South China sea will mean war.

While Bible prophecy in Ezekiel 38-39 gives us many details about a final World War III which will be started by Russia, China, Iran and their allies at the very end of the “latter days” (Ezekiel 38:16), biblical prophecies do not preclude regional wars between those nations and the western bloc prior to the great apocalyptic war at the end of our age. Matthew 24:6-7 does warn about a series of “wars and rumors of wars” that will occur in the run-up to the end of the age, but offers no details about who will be involved in these wars. A regional war between China and the US and some of its allies over Taiwan or the South China Sea would fit into the series of wars predicted in Matthew 24:6-7. There are major, prophesied end-time events which have not yet occurred, so I do not think we are at the precipice where the age-ending war is about to begin. For example, Babylon the Great’s global world political/financial system has not yet fallen (Revelation 17-18), the “beast” system has not yet risen to replace it (Revelation 13:1-5, 17:1-18) and God’s Two Witnesses (Revelation 11) have not yet arrived on the world scene. In the Bible’s prophetic timetables, these events should precede the great final war prophesied in Ezekiel 38-39. However, Jesus Christ did prophesy in Matthew 24:21-22 that due to unprecedented dangers in the world situation, God’s end-time timetable will be cut short. This allows for God to intervene directly in world affairs much sooner than Christians (or anyone else) expect. The message of the parable in Matthew 25:1-13 also warns Christians that Jesus Christ (the “bridegroom”) will, in the latter days, come much sooner than his followers (the “bride”) expect.  Therefore, believers need to be very aware of what is happening in the world and make whatever reasonable preparations they can to prepare for these age-ending times. For more on how biblical prophecies connect to and reveal much about modern geopolitics, please read my free articles: Are We Living in the Biblical Latter Days?, What Ezekiel 38-39 Reveal about a Future World War III, The Two Witnesses, The USA in Biblical Prophecy, and Should Christians Prepare for Future Hard Times?

The world could be on the brink of several major events that will change the shape of the world’s current geopolitical realities. The world is steadily edging closer to war in the South China Sea as well as in the Middle East. The EU is also fracturing before our eyes as previous posts have discussed. I think it would be a mistake to blithely go forward into the future thinking everything will work out and nothing bad will happen. Bible prophecies guarantee that a time of great global dangers is in our future. You need to be aware of major events and trends that the mainstream media does not discuss or mention very much. This blog will continue to attempt to inform as many people as possible about what biblical prophecies foretell will occur in our future.

One last thought. If a regional war between China and the USA and some of its allies does break out, many consumer products that you depend on will not be available on store shelves for some time. If a war with China breaks out, all trade between the USA and China will cease for an unknown period of time. Give yourself this test whenever you go shopping. Examine the label of everything you buy and see if it says “Made in China.” If it does, those products so marked will quickly disappear from store shelves in any shooting war between China and the USA. Those are products you need to stock up on…while you still can.