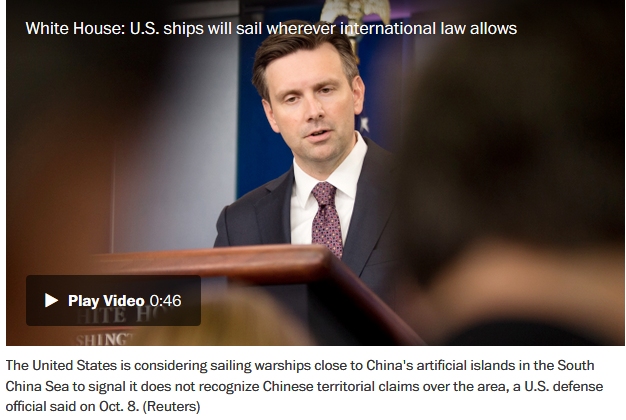 Media reports indicate that a confrontation is pending between the USA and China in the South China Sea. As readers realize, China has strangely asserted a claim to virtually the entire South China Sea and has been rapidly building air bases and military-ready facilities on artificially built-up islands in the South China Sea. Unless China is confronted on this matter, its aggressiveness can be expected to intensify. I’m sure many nations in the Pacific region have been waiting expectantly to see if the USA is ever going to do something in response to China’s bellicose actions.

The first link reports that the Pentagon now has plans to deploy warships to sail within twelve miles of China’s artificial islands to assert the claim that the South China Sea is still international waters and free for all nations to traverse. Such action will obviously militarily assert that the USA does not recognize China’s claim to the South China Sea. The second link and third link report that China has pointedly warned the USA not to take such action, so a confrontation seems imminent. Now that the American plan to sail warships within twelve miles of China’s artificial islands has been made globally public, if President Obama does not follow up and take that action, he will look even weaker than he already does on the world scene. If Obama does not militarily assert that the South China Sea constitutes international waters with such action, he will have “blinked” even before the confrontation starts. He would “lose face” throughout the Pacific region and the world.

Let’s watch this situation to see what happens. If the USA backs down and does not take its announced action, we will know that Obama has once again demonstrated his chronic weakness in global geopolitics. I would suggest that it would strengthen the US action if several other Asian nations also sent warships to join a flotilla of US warships in sailing within twelve miles of the artificial islands built up by China. The other regional nations (from Japan to India) have much to lose if China is allowed to grab all the South China Sea. They should join the effort. If they don’t, they will all also demonstrate a policy of weakness and “lose face” as well.

This confrontation certainly fits within the context of the prophecy in Ezekiel 38-39 about the two major global alliances confronting each other in the latter days of our age. I have suggested in previous posts that China’s military is badly in need of combat experience and its new weapons systems remain untested in combat conditions. China needs a regional or proxy war to get its military some combat experience and test its new weaponry. However, as recent posts have noted, China is very close to joining Russia is participating in the Mideast war in behalf of the Assad regime in Syria. That will be a conflict where China can test new weapons and give its pilots some combat experience. China may not want to be involved in two regional wars at the same time. If a shooting conflict breaks out between China and the USA (and allied nations) in the South China Sea, the conflict could globalize quickly. If China opens fire on US warships in the South China Sea, China’s aircraft carrier now off the Syrian coast may quickly find itself on the bottom of the Mediterranean Sea. If NATO is smart, they will have subs stationed off Syria to immediately sink the Chinese carrier now in the Mediterranean Sea when/if China opens fire on American/NATO or allied warships in the South China Sea. My sense of things is that Russia does not want China to start a larger war right now over a minor matter so Russia may lobby China to hold off on opening fire in any South China Sea confrontation. However, China may want its regional war and be bellicose enough to open fire. This is a dangerous developing situation which we should watch carefully.

My thanks to a reader for sending one of the links.