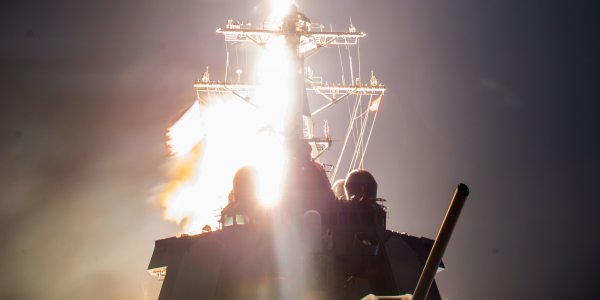 While many Americans (and others) may not realize it, the USA is in the process of aggressively installing in variety of locations a sophisticated air defense system called Aegis Ashore, which is a land-based version of the Aegis air defense system installed on many American (and allied) warships. This air defense system was originally deployed to defend US carriers and surface warships against incoming anti-ship missiles and attacking aircraft. However, this same air defense system is now increasingly being placed on land locations to help defend land-based targets from incoming missiles (and, presumably, aircraft as well). The land-based system was originally designed to be effective against short and medium range missile threats; however, a recent test confirms that the system will soon be able to defend against ICBMs (first link). This latter ability is very important given the threat posed by North Korean ICBMs.

The land-based Aegis system was first installed and made operational in Romania in 2016, a NATO nation on the Black Sea. This system was hailed as a means of defending Europe from an attack by Iranian ballistic missiles, but it surely would be able to defend against some Russian missiles as well, which angers Russia (second link). A rarely-seen video tour of parts of the sophisticated Aegis Ashore system in Romania is attached as the third link. The third link is short and hardly riveting, but it does show the imposing structures housing this American/NATO anti-missile system. To say that it has rarely been seen is an understatement. When was the last time you watched a YouTube video with barely 250 “views?”

A previous post discussed the threat posed by Russian missiles that could be fired against NATO targets from the Russian enclave in Kaliningrad, located on the Baltic Sea between Poland and Lithuania. NATO and Poland are keenly aware of this threat and an Aegis Ashore air defense system is now being installed in Poland to help defend northern NATO nations from Russian threats (fourth link). This Aegis Ashore battery in Poland should be operational late in 2018.

An Aegis Ashore system also has a test location installed in Hawaii. Japan’s Defense Minister recently visited this site to determine whether Japan should invest in buying the Aegis Ashore system to defend the Japanese Home Islands (fifth link and sixth link). Given the threat to the entire US mainland from North Korean ICBMs, it would seem logical to install Aegis Ashore systems along the American East and West Coasts for defending American cities and targets from incoming missiles launched by enemies. These threats could include short-or medium-range missiles launched from enemy submarines, terrorist-operated merchant ships that may possess a short-range missile, etc. While America has another missile-defense system primarily located in Alaska to defend against incoming ICBMs (such as those from North Korea), that system has never been tested against an actual missile attack yet. If the USA continues to procrastinate in launching a preemptive strike vs. North Korea’s nuclear and missile locations, that Alaskan-based anti-missile defense system may be put to the test. However, if the Aegis Ashore system can now be adapted to defend against ballistic missiles, it makes sense to install in on America’s coastlines to create another layer of essential missile defense for America. If Romania and Poland can be protected from incoming missiles via the American Aegis Ashore system, why not also protect the USA with this American-built system?

While Ezekiel 38-39’s prophecy about a latter-day World War III uses ancient metaphorical language to describe modern weaponry, Ezekiel 39:1-3 prophesies that the attack of the Gog-Magog alliance (Russia, China, Iran and their allies) vs. the alliance of the modern house of Israel (the USA, NATO and their allies) will include missile launchers and missiles. The prophetic language uses the ancient terms “bows” and “arrows” (the long-distance launchers and missiles in Ezekiel’s time), but since this prophecy is clearly for the latter days (Ezekiel 38:8 and 16), we can understand these ancient terms to reference the modern long-distance weapons of missiles and their launching systems. Ezekiel 39:3 foretells that the “arrows” and “bows” of the Gog-Magog alliance will not be effective in this end-time war. The prophecy states that God will “smite” the bows and arrows of the Gog-Magog alliance, but this can be interpreted two ways. God could certainly do this by Divine fiat via angels or simply by willing it to occur, but God often works through human instruments to accomplish his stated will. The Aegis Ashore system now being steadily deployed to new locations to defend the western alliance could fulfill that prophecy if God decides to work through human instrumentality to accomplish his prophesied will in Ezekiel 39:1-3.

[Since I brought up the subject of ancient weaponry, many readers may be aware that the ancient Romans used ballistas and trebuchets to fire stones and arrows a great distance in ancient warfare. Did you realize the Bible records that the ancient Israelites used these same weapons many centuries prior to the Romans? I refer readers to the final link in this post which describes the fact that II Chronicles 26:13-15 records that ancient King Uzziah of the kingdom of Judah built ballistas and trebuchets into the fortified walls of Jerusalem to defend the city vs. invaders (who would almost certainly have had the same weapons).]

The two great western and eastern alliances in the modern world are jostling for advantage in weaponry, technologies and strategic placement of key weapons system all over the world. These two global alliances were foretold to come into existence in the latter days of mankind’s final age of self-rule on earth just before divine intervention occurs when Jesus Christ (the Messiah) returns and sets up the Kingdom of God/Messianic Kingdom (Ezekiel 38:20-23, Revelation 19:11-20:4). World events indicate we are beginning to hurtle toward that prophetic fulfillment. For more detailed information regarding the above topics, please read my articles, Are We Living in the Biblical Latter Days?, What Ezekiel 38-39 Reveals about a Future World War III and The USA in Bible Prophecy. For a very comprehensive examination of the locations of the ten tribes of Israel in the modern world and how they are now positioned to fulfill various biblical prophecies about them, please obtain copies of my books available at the homepage of my website.