AI Swarms of Mini-Bots That Can Kill “Half a City” 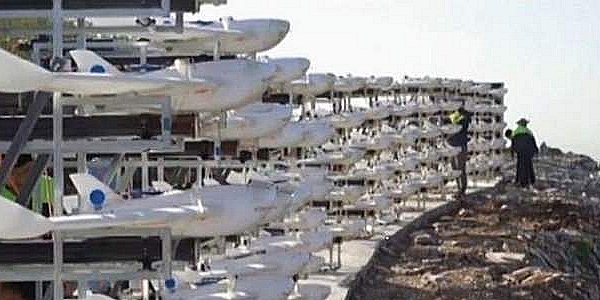 This is one occasion where I want to quickly pass on to readers a video-link that reveals the development of a chilling new weapons system that can use mini-drones and AI programming to “kill half a city” and even target specific individuals or groups for elimination. It is apparently an autonomous weapons system that can release a vast quantity of AI-guided minibots which can target people based on facial-recognition patterns and likely other personal identifiers as well. This will be a short post as the video speaks for itself.

I urge you to watch the video. It’s implications are, I think, worse than you can imagine without seeing the video. I hoped that this was an example of “fake news,” but a web-search found other apparently valid stories about this same new weapons system (second link). The advocate for this new weapons system claims that it can be programmed to kill an individual, a group of people or “half a city” based on its AI-programming and how many of the mini-bots are dropped from an airplane.

While I am just a layman in such technologies, I cannot help but wonder “Who programs this new ‘swarm’ weapons system to differentiate between “good guys” and “bad guys?” What if the “bad guys” get ahold of this technology? The potential for mass disasters are really breath-taking if this weapons system of murderous swarming mini-bots is ever deployed. This video also begs the following questions: “How many nations have this technology already? Is it already deployed? It sounds to me like this technology could be programmed to kill all the members of a certain race or gender in a target area that is attacked using facial recognition software.

The Apostle Paul prophesied in II Timothy 3:1 that “perilous times” would exist in the latter days of our age. The video shows just how “perilous” future wars or terrorist attacks could become. For example, if a war is fought between two nations with different racial characteristics, one side could release swarms of these AI-programmed mini-bots to kill anyone whose facial-recognition pattern fits the racial profiles of the “other race.” Can you imagine this kind of doomsday weapon in the hands of the “beast” power in the latter days? This kind of weaponry shows just how dangerous high-tech knowledge is in the hands of mankind when people have no scruples of any kind. In a time when it seems anything digital can be hacked, how can any nation keep this technology from being hacked and copied or hijacked by an enemy force?

I’d love for this link to be “fake news,” but it seems entirely plausible given the pace of developments in drone miniaturization, facial recognition and AI technology. After watching this video, you may need a drink.

My thanks to a reader who sent me this video.