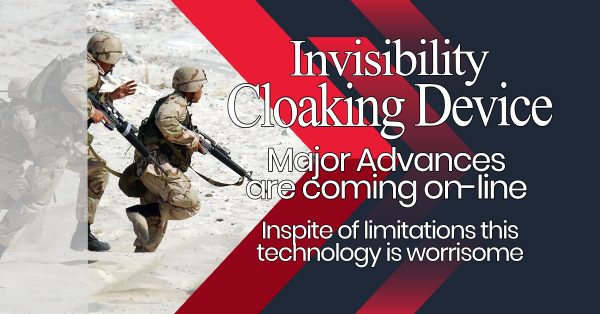 The topic of developing invisibility/cloaking technology is one which I have watched closely over the years. It has received almost no mainstream media coverage in recent years, but it is clear from the links below that major advances have been made in this technology. The more this technology advances in sophistication, the more I am convinced that it will play a role in duping the masses when “the beast and false prophet” system are extant on the earth. Before discussing those possibilities, let’s see what has happened with the technology.

The first link reveals that a Canadian company has made remarkable advances in refining its invisibility technology. The link shows a small-scale example of the technology, but the link’s captions and demonstration show clearly that it is intended “for war zones.” This is a technology that is intended to cloak tanks, warplanes and (obviously) soldiers on a battlefield. This technology is further advantageous as it shields objects or people from infra-red, ultra-violet and even thermal detection. The second link includes an interview with an Israeli scientist which offers considerably more technical details regarding the state of this technology and how nations intend to use and deploy invisibility cloaks in the future. The link clearly states this technology is being developed for “military applications” and that tanks or soldiers will be rendered invisible to enemies. It is briefly mentioned that this technology would be useful in hostage-rescue situations or to infiltrate undetectable snipers into position (where they could perform assassinations or act to guard certain locations and terrains from infiltration by enemies). He uses the term “optical camouflage” to describe the technology. What I thought was also very important was his technical description that not only can objects be cloaked, but it is also possible to make objects appear in a location even though they are not really there. If a military force could cloak its real weaponry and “displace” their light images so they are made to appear somewhere else, all an enemy’s fire can be misdirected to the false images of real weapons. The military applications are almost limitless. Indeed, as this technology is perfected by the major militaries of the world, any nation which does not have this technology will be a minor-league force.

In the third link, a person explains what he feels are some of the limitations in invisibility cloaks, and it also allows for the possibility that there is more than one kind of cloak being developed. As this video shows, a cloak can be made to make either horizontal or vertical lines “disappear” while leaving the other directional objects visible–even if the objects are side-by-side. This selective invisibility could easily be adapted to construct some very convincing visual deceptions. Indeed, the presenter acknowledges that one of these types of cloaking lenses can be used for “magic tricks.” He cites a “Lubor’s lens,” and his demonstrations on a small scale reveals how on-stage magic tricks can be performed to trick an audience into thinking certain objects aren’t there (when they really are) or that they are in a location other than where they really are located. This technology has possible applications far more deadly and strategic than a magic show on a stage.

Obviously, no nation is going to reveal the actual advanced state to which they have developed invisibility/cloaking technology. These videos only reveal what the general public is being allowed to know. Each nation will want to hide its true level of development in order to surprise an enemy with it in a real war. For example, who knows what DARPA has developed for the USA with its virtually unlimited access to black-ops funding? Besides hiding the presence or location of weaponry and military personnel on a battlefield, this technology could be easily used to perform an assassination or an attack which is actually a “false flag” operation being concealed by cloaking technology. I would like to point out that even if tanks and warplanes are hidden behind invisibility cloaks, their engines are very noisy and an invisibility cloak would have to be accompanied by a separate technology to suppress noise for the invisibility cloak to be fully effective.

I’d like to offer one other current possibility. How many UFO TV-documentaries and video-clips have you seen where UFOs are shown on videos making right-angle turns and impossible maneuvers and even “disappearing” while observers are watching them?  If some of these UFOS are actually examples of top-secret new military aerial platforms using a new form of propulsion technology, then several possible very “down to earth” explanations are possible. If a group of such aerial platforms are all cloaked they can work together to give observers a false impression that right-angle turns are occurring when they actually are not happening at all. Consider two such aerial vehicles flying perpendicular to each other in the same plane in the sky. One platform could be flying in a straight line without its cloaking technology activated, so it would be visible. It could fly toward another aerial platform whose invisibility cloak is engaged and is, therefore, invisible. Let us assume they are flying in paths perpendicular to each other. At the precise point where their paths intersect, it would appear to observers that a right-angle maneuver had occurred if each aerial platform reverses the cloaking status it had as it approached that point of intersection (i.e. one aerial platform would switch its cloaking shield “off” at the exact moment when the other such platform traveling perpendicular to the other vehicle turns its cloaking device “on.” To all observers, it would appear that one aerial object had made an impossible (“alien”) right-angle turn when, in fact, there were two aerial objects acting together to trick observers by their synchronized use of cloaking devices. This kind of UFO technique would be very useful if humanity is being “programmed” to accept the existence of “alien UFOs” which could be foisted off on the public in a future very high-tech deception.

Now let’s consider some possible biblical prophetic fulfillments for this technology. Some long-time readers will know I’ve mentioned some of these possibilities years ago (two of my posts from 2008 and 2010 are included as the fourth link and fifth link). In Matthew 24:23-27, Jesus Christ warned that deceptions would become so sophisticated at the time of the end of this age that even “the very elect” would be duped by, them “if it were possible.” In order to almost deceive well-grounded, biblically-knowledgeable believers, the beast/false prophet system will need to devise deceptions that seem to replicate events or manifestations that the believers expect to occur. With invisibility technology and cloaked (and silent) aerial platforms, a phony “return of Jesus Christ” could be simulated by having a glowing being (actually a human in a light-generating costume) descending from the sky (actually being lowered from an invisible vertical tether from a cloaked aerial platform). Remember how the third link demonstrated that vertical lines could be made invisible next to other objects which could remain visible? Deceptive angelic manifestations of all kinds could be made to appear in the sky or on the ground via the use of invisibility cloaks. People could hear what they think are “voices from God” which are really human voices being spoken from a near-by cloaked and invisible  human being.  The possibilities are almost endless for deceptions. The Apostle Paul foretold in II Thessalonians 2:3-11 that some of the miracles performed by the “man of sin” will be “lying wonders” (verse 9). In other words, they will be faked miracles done with high-tech trickery. However, some miracles will, indeed, be performed either by the devil and his angels or by evil humans energized and used by them (Revelation 13:11-18). II Thessalonians 2:11 foretells and warns that the very end of this age will feature a “strong delusion” and a big “lie” that will be believed by the duped masses. Revelation 13:1-4 prophesies that when the beast system does get revealed, the world will see such advanced, and previously unknown, military technologies that the world will wonder “Who is able to make war with him?” This is entirely consistent with the fact that weaponry (large and small) can already be hidden by cloaking technologies. When Revelation 13:1-4 is fulfilled and the beast system intimidates the nations and masses with previously-unknown weaponry (maybe de-cloaking hovering aerial vehicles unknown to humanity), we will be very close to the end of this age and the return of Jesus Christ. Revelation 19:11-20:4 also shows that when Christ does return, his heavenly army will destroy all the beast’s weaponry with ease. Consider the famous James Bond movies. Some of them feature super-rich corporate villains who use secret technologies and plans to enslave or eliminate mankind. The sophistication of modern technologies and super-rich global corporations and individuals make it possible that the prophesied “beast” could actually be a multi-billionaire or corporate CEO, not a national political leader. Time will tell.

In conclusion, we know that mankind is developing highly-advanced technologies and that we are only being given a glimpse of what has actually already been developed.  I think it is possible that weaponry and technologies have been developed about which we can scarcely imagine.  Genesis 11:6 quotes God Himself as acknowledging that when mankind reaches a “tipping point” of high-tech knowledge (which the pre-Flood civilization had reached and which the “tower of Babel” project was approaching) that “nothing will be restrained from them which they have imagined to do.” Matthew 24:37 cites Jesus Christ as prophesying the end time civilization of our age will mirror the pre-Flood civilization of Noah so our age is now developing the same super-technologies that the pre-Flood developed millennia ago before God annihilated that civilization.

Get ready for some amazing events and developments that will happen in the years between now and the end of our age. We are likely to see some “science fiction” technologies and themes become “science fact.”