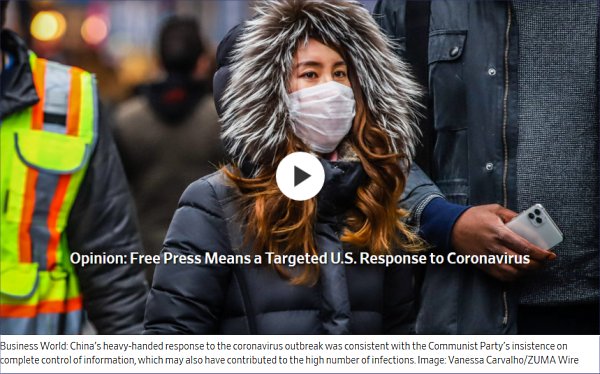 While I would like to post on a number of other topics that are worthy of attention, the growing threat of the coronavirus outbreak in China is now dwarfing all other international threats and events. There is abundant evidence that China has grossly understated the number of coronavirus deaths and infections and the evidence presented in this post may shock you. First, let’s examine the “official” totals from China’s Communist party leaders. The first link details the unsurprising news that even China is admitting its earlier totals were severely understating the totals. This link reports a counting change which is merely definitional; it doesn’t retroactively recalculate the totals to reflect real data. It also shows the definitional change affects only Hubei province. The second link, commenting on this change in counting official totals, states that “mistrust of the Chinese government…remains pervasive” when it comes to honest data about the extent of the epidemic. It adds any firm data about the actual number of deaths and infections in China remains “elusive.”

The third link has explosive information. It is from a column by Holman W. Jenkins Jr. in the Wall Street Journal on page A15 of its February 12th edition. I mention these specifics as the article may not be accessible to readers unless they are subscribers. If you cannot open the article, you can read it at a library that carries that newspaper. I will offer some excerpts from the article. It states that “those with mild symptoms aren’t even being tested” in China, and that the “underreporting by China of mild cases…may number in the millions by now (emphasis added).” Lest you think this is a wild guess, this estimate was “gleaned from expert testimony before a House subcommittee last week.” I’ll bet you never heard about that information in the major media. Neither did I. The column does opine that “suppressing news of its outbreak once it was discovered was China’s most fatal mistake.”

The fourth link includes more alarming statistics about the real extent of this virus (now called COVID-19). The article entitled “Wuhan Residents Worry Over Tests,” also from the Wall Street Journal’s February 12th issue (page A7), includes the statement: “Medical experts around the globe have expressed fears that the outbreak could be much larger than Chinese data suggest…” One analysis, based on testing analysis, indicates that the total number of infections in Wuhan maybe 19 times higher than reported! That would mean that approximately one million may be infected already and that the death total may already be near 22,000. The link can also likely be read-only by subscribers, but the information will allow others to find the article at a library. This article also reveals that the Chinese testing procedures are only accurate for diagnosing upper-respiratory-tract infections and that they do not catch lower-respiratory tract infections. This failing is resulting in infected people with negative tests being released to spread the disease further in the general population.

The fifth link asserts that North Korea is not telling the truth about it not having any coronavirus cases and that it could spread very fast in that nation without a sophisticated health care system. North Korea, in spite of saying it has no cases, has instituted a 30-day quarantine for infected people. Singapore, a major transportation and meeting hub for Asian businesses and travelers, is termed especially vulnerable to the coronavirus in the sixth link. That link includes a chart tracing how infections were spread to Europe and Asian nations by attendees at a Singapore conference. Presumably, everyone at that conference was exposed to the coronavirus virus and has, by now, spread it throughout airports and nations on their travel routes to their home countries. Singapore is taking tough measures to control the spread of the pandemic and has shut its borders to China, as have Russia and North Korea.

The World Health Organization, which seemed to be downplaying the pandemic at first, has now issued some very dire warnings about how bad this global pandemic could be if it is not contained soon. The seventh link discusses these warnings and those of other scientific researchers. One worst-case projection warns that at the rate it is spreading, “60%” of the global population could be infected and the death total could reach 100 million and that total is based on a very low 2% mortality rate. One researcher, Dr. Neill Ferguson of Imperial College in London, estimates that “as many as 50,000 people may be infected each day in China (emphasis added). This coronavirus is also spreading to an unknown extent in the Chinese military. According to the eighth link, thousands of Chinese soldiers and policemen have either been infected with the disease or are being quarantined due to their exposure to the disease. The link reports that the Chinese navy has also been infected and that a major training program for nuclear submarine crews has been suspended due to the outbreak. This link also has the disturbing report that the incubation period of the disease may be as long as 24 days. If true, it means some people released after 14-day quarantines could still be unknowingly spreading the disease after their release.  In the United States, Senator Tom Cotton is demanding that China prove the outbreak wasn’t caused by a bio-weapon developed by the Chinese government (ninth link).

This pandemic is having ever-greater business impacts. Due to fears of the coronavirus spreading in Europe, one of the world’s largest smart-phone tech conferences in Barcelona, Spain has been canceled (tenth link). There is even a report that millions of businesses in China may be “wiped out” due to the spread of this pandemic (eleventh link). Since it is clear that we are only in the “preliminary stages” of the pandemic (see expert’s opinion to that effect in the seventh link) which is so far most severe in Asia, it may not be too soon to wonder if the 2020 Olympic Games, scheduled for later this year in Tokyo, may have to be suspended to prevent further spreading of the virus to people all over the earth. Already, the media has reports of cruise ships having travelers being infected and quarantined and some cruise ships have even been refused docking privileges at ports. With travel being the main way the disease is spread around the world, the hospitality industry is likely to be especially hard hit by this pandemic.

This pandemic is clearly getting much more serious, and it looks increasingly like it will become a plague of biblical proportions, as I discussed in my previous post. As mentioned in my previous post, I urge readers to review my articles, Are We Living in the Biblical Latter Days? and Should Christians Prepare for Future Hard Times? If the more dire estimates by experts cited above come to pass, the “future hard times” may be imminent in many nations.

My thanks to a reader for sending me one of the above links.