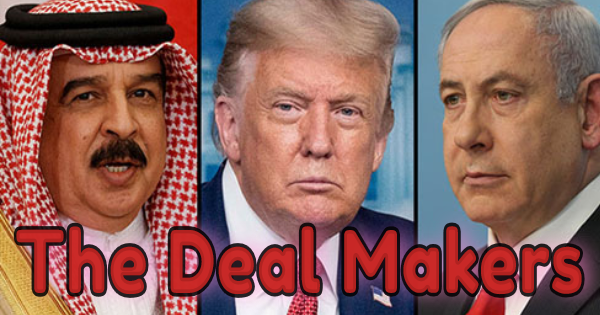 New developments in the Mideast are happening rapidly. These developments are changing realities in the entire Mideast, but the media will not discuss or publicize how dramatic these changes are because it is a huge foreign policy triumph for President Trump just before the election. These “Abraham Accords” greatly decrease the chances of war in the Mideast because Iran will steadily be confronted with a growing number of Sunni Arab nations allied to Israel in common cause vs. Shiite (and Persian) Iran. This makes the likelihood of a war with Iran less likely for now because they are being confronted with an alliance of growing strength. These peace accords between Israel and the Arab nations mention many areas of cooperation between the new partners, but all references to “security” agreements are a euphemism for military cooperation. These peace accords also greatly lessen the chances of American military personnel having to go to the Mideast to die there in a war, not of our making or desire. America’s military forces have been involved with a series of very costly wars in Afghanistan and Iraq since 1991, and our military personnel and equipment need time to rest from combat operations.

The first link is a short video clip of the signing of the Mideast Peace Accords at the White House by President Donald Trump, Prime Minister Benjamin Netanyahu, UAE Foreign Minister Sheikh Abdullah bin Zayed al Nahyan and Bahrain’s Foreign Minister, Abdullatif Al Zayani. They all are relishing the moment. The establishment of airline service between Israel and the UAE and Bahrain indicates the Saudis approved the increasing use of Saudi airspace by Israeli airliners, and this presages the eventual addition of Saudi Arabia to the Abraham Accords. It is very hard to overstate the importance of this history-changing event. Norwegian and Swedish parliamentarians have nominated President Trump for the Nobel Peace Prize and this epic peace deal would qualify him for that award. Don’t look for the Leftist media to campaign for that to happen the way they cheered President Obama’s receipt of the Nobel Peace Prize even though he had done nothing to deserve it.

Expect more Arab nations to join these accords. The second link reports that Egypt complimented the Arab nations for joining Egypt and Jordan in having full diplomatic relations with Israel. The Arab nation of Oman “welcomed” Bahrain’s joining the UAE in these Accords, and the link also reports Morocco and Israel are discussing the establishment of civilian airline travel between these two nations. This strongly argues that Oman and Morocco will be joining the “Abraham accords” as well. This process looks like it is going to gather momentum as it unfolds.

The third link offers one Israeli’s opinion abut this peace deal. It contrasts this real peace agreement with real results with the fake “Oslo Accords” peace agreement that occurred 27 years ago between President Clinton, Israeli Prime Minister Rabin, and PLO Chairman Arafat. That previous agreement had no real results because Arafat and the Palestinians had no intention of keeping the agreement. They reneged on it and nothing meaningful came from it. These new “Abraham Accords” agreements have real results with them which are being quickly implemented. One reason the Abrahamic Accords will succeed is that the Palestinians are not part of the deal. This means they cannot sabotage it.

In a previous post on this new Mideast peace process, I pointed out that the name “Abraham Accords” reveals that the participants understand that the Arabs are descendants of Abraham via Ishmael and the Jews are descendants of Abraham via Isaac. What may not be apparent to the participants is that President Trump’s presence represents the participation of the modern House of Israel (i.e. the ten tribes of Israel) which was never “Jewish” in ancient history and is not now today. All four participants in the Abraham Accords signing are descendants of Abraham. The USA is primarily the nation associated with the tribe of Manasseh, descended from Abraham via Isaac, Israel/Jacob, and Joseph. My books, audio messages, and articles have vast amounts of documentation confirming this identification. For the main “bullet points” of this identification, please read my article, The USA in Biblical Prophecy. If any readers need evidence that today’s Jews are the tribe of Judah, please read my article, Four Reasons the Jews are Judah, and you will see abundant proof of that identification as well. My book series containing the comprehensive history of the so-called “lost ten tribes of Israel” also acknowledges that the Arabs are the descendants of Ishmael.

Not many media reports have noted that the term “Abraham Accords” reveals the participants in the peace deals are declaring that their common ancestor is the biblical patriarch, Abraham. However, I did find one reference to this fact in the Leftist media. The fourth link has an article about this new Mideast peace agreement that does admit the “Abraham Accords” could be called the “Isaac and Ishmael” summit. However, because this is a Leftist, anti-Trump publication, it tries to minimize and criticize the Abraham Accords, and it goes to great lengths to deny President Trump the credit he deserves for making this deal happen. So please realize I am not including this article for its literary content; it is included as it is a rare example of any publication at least acknowledging the biblically stated descent of both the Jews and Arabs from Abraham.

I’d like to close this post with a link revealing something virtually ignored by the major media, but which truly “speaks volumes” about the “sea change” in Mideast politics unfolding before our eyes. In what the link quite rightly calls a “stunning reversal,” the Arab nations of the Gulf Cooperation Council (GCC) have “demanded that the Palestinians apologize over a matter related to Israel” (fifth link). The UAE and Bahrain now have established diplomatic relations with Israel, but the other Arab nations of the GCC joining this demand do not yet have diplomatic relations with Israel. That they joined this declaration demanding the Palestinians apologize in a matter involving the Israeli-Arab peace process strongly indicates that it is only a matter of time until these other Arab nations also establish diplomatic relations with Israel.

The Mideast is changing fast. As more Arab nations make peace with Israel and establish diplomatic relations with Israel that includes security cooperation, the eventual development of a kind of “Mideast NATO” also becomes more likely. Since the Trump administration is not bound by the failed frameworks of past Mideast negotiations and is “going big” with a much larger “deal of the century” than anyone thought possible, a new Mideast military alliance joining the Sunni Arab nations, Israel, and possibly some NATO/European nations may eventually become a reality.