A “Universal Translator” Within a Decade?…And Pre-flood Implications 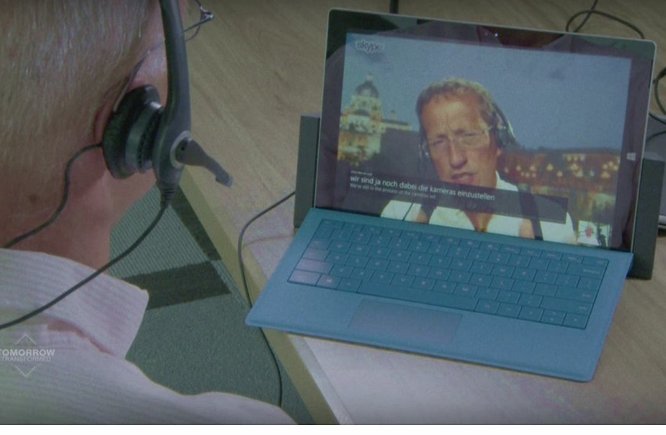 Progress is being made toward implementing another technological theme of the Star Trek series. First, flip-phone communicators were implemented early in the cell phone era. Recently, 3-D printers have been making initial but real steps toward the deployment of Star-Trek “replicator” technology. Remember the “universal translator” that made it easy for the Star Trek crew to converse with all aliens in English (at least for English-speaking viewers of the series)? The Wall Street Journal recently published an article that just such a tool may be available within a decade or so.

The new translator would revolutionize communications all over the planet. In theory, it would have an earpiece that would offer virtually instantaneous translations in any earthly language which is programmed into its database. Not only would it do that, but it would translate the speaker’s words to the listener in the speaker’s own voice. That would be a remarkable achievement. This would be an additional fulfillment of biblical prophecy and have a new biblical twist as well.

It would be a further fulfillment of the prophecy in Daniel 12:1-4 that there would be a knowledge explosion in “the time of the end” (another biblical phrase for the “the latter days” of this age). It would also be another example of the truth of Genesis 12:6 that mankind, created in the image of God himself (Gen. 1:26-27), is innately able to develop and implement whatever mankind imagines to do unless God does something to hold that development back. This fact alone makes a mockery of the theory of evolution–such an advanced god-like ability to implement a creative concept would be impossible unless mankind was uniquely made in the image of an all-powerful Creator God. While the “universal translator” discussed in the link below would be able to offer near-instant translations in all world languages fed into its database, it could not do translations if users of the technology interacted with earthly languages or aliens whose language was not in the database. It would not be able to facilitate communications if the Vulcans and Klingons do show up so it wouldn’t be a “universal translator” on the scale depicted in the Star-Trek series, but it would be an amazing achievement, nonetheless.

Here is where it really gets interesting. Jesus Christ’s prophecy in Matthew 24:37 that the latter-day civilization on earth would mirror the pre-Flood world of Noah argues that our modern world’s technology explosion is re-creating the technologies of the pre-Flood world. In the aftermath of the Deluge, Noah’s family and descendants doubtless had many of the tools, gadgets, schematics, blueprints, etc. on board the Ark so they could rebuild their dwellings, conveniences and way of life. Noah’s Ark was not just a crude way to preserve mankind and some of the animal species into a new post-Flood world, it was also a time-capsule of the pre-Flood world. The Bible indicates that post-Flood mankind began to try and rebuild the pre-Flood technologies as soon as they birthed the manpower to have a workforce. Genesis 11 is part of the first five books of the Bible accredited to Moses. Like the Apostle John in the book of Revelation, Moses had to describe high-tech concepts or devices in a low-tech vocabulary. Moses describes in Genesis 11:1-6 that mankind was constructing a “tower” (a tall, erect structure) whose top-most portion (its “rosh” to use the Hebrew word for “top” in verse) would “reach unto the heavens.” Mankind today has had many such “towers” for decades whose top-most portion (“nose-cones” or payloads) literally do “reach unto the heavens.” We call them missiles, rockets and launch vehicles. Given Jesus Christ’s prophecy that our modern, “latter day” society would mirror the pre-Flood civilization and we have such rockets today, it follows that so did the pre-Flood world. Mankind, after the deluge, was, in my firm opinion, attempting to re-create the pre-Flood space program. At the very least, I think they wanted to launch recon satellites to map the new topography of the post-Flood world. God decided that this “tower” project was way too advanced for his purpose for post-Flood mankind so he confused the languages so each nation had its own spoken language but no written language. Everyone became illiterate in an instant. This ended the “tower” project and the gibberish that occurred when people tried to talk to each other ended their willingness to share or pool knowledge.

If post-Flood mankind was building space launch vehicles, how far did the work progress before God put a stop to it? Maybe a lot further than we realize. Late-night Ancient Aliens and similar other cable TV programs have documented many very high-tech ancient artifacts and abilities, and ancient texts like the Mahabharata, a historical record of very ancient times from the annals in India, mention many types of atmospheric and space-travel vehicles called “Vimana.” Many of these cable-TV programs speculate that these ancient, high-tech, flying vehicles and megalithic structures are evidence that space-aliens from other solar systems founded mankind’s presence on earth. In fact, the Bible has the correct explanation: that ancient mankind was initially created at a far higher plane than the one in which modern mankind now exists and they could do far more than we can. Vimana, models of ancient airplanes, megalithic structures, etc. are either remnants of the pre-Flood era (the Giza Pyramids and Sphinx, perhaps?) or the post-Flood societies that existed before mankind’s languages were confused. Whatever high-tech devices existed at the time God confused the languages would still have been in existence and in good working order at the time the languages were confused. The nascent nations would have likely fought over possession of all such devices as the operators and maintenance force for them would still have the “head knowledge” of how to operate them, but would have lost the ability and willingness to share that knowledge or pass it on to future generations. The pre-Flood documents that survived the Flood on the Ark would all have become worthless as no one could speak the pre-Flood language any longer. It is possible, but not certain, that some very ancient scripts that have been excavated but not yet deciphered are examples of the pre-Flood written language that surely existed in many media at the time the languages were confused. Stone-engraved scripts would have been the most crude examples of that script, but would likely be the only ones to survive to our time.

Now back to the “universal translator” discussed in the link below. Do you realize its true significance? It would essentially reverse what God did at Babel! All the different language groups on the earth today would be able to pool and share high-tech knowledge in real-time as soon as this device is operational. Think how this would accelerate the development of more breathtaking advances in modern technology? Is “warp speed,” or at least a vastly more efficient means of propulsion for interplanetary space vehicles just so many years away? The ancient Indian historical texts speak of the propulsive capabilities inherent in the element, mercury. I would suggest to NASA and space scientists to focus on that element and try unlocking its propulsive powers that the ancients once understood.

The higher that our modern technology becomes, the more it affirms the Bible’s narratives and prophecies. However, I bet you won’t see that mentioned on cable-TV programs.

My thanks to a reader who tipped me off to this article.

Additional input related to the link above;

And while it can’t yet guarantee that no fine detail will be lost in translation, Microsoft’s new idea for its video chat platform surely feels like something straight out of science fiction.

No longer will our hopes for such a marvel be tagged to imaginary aquatic creatures — the Babel fish from “The Hitchhiker’s guide to the galaxy” — or improbable “telepathic fields”, such as the one cast by Doctor Who’s TARDIS to relay any alien language to its pilot in plain English.

It all sounds, in fact, quite similar to what Klingons in Star Trek use to make their generally belligerent intentions quite clear: an unseen, but ever-present, “universal translator”.

“The idea that people don’t understand each other, it’s going to be a thing of the past,” Gurdeep Pall, Corporate VP of Skype, told CNN’s Richard Quest.

“In the same way it’s hard to imagine a world before you were able to travel to different places and quickly, whether it be in a car or a plane, we’ll never think about, wow, those were the dark ages where people couldn’t understand each other. That’s where we’re headed.”

It will be available as a Windows 8 beta app before the end of the year, but Microsoft is already showing off its English to German functionality, as you can see in the video above.

It is still unclear whether the service will be free for the 300 million Skype users, or will be extended to other platforms.

Microsoft is not alone in its quest for a universal translator. Google already offers translation by voice in its Google Translation service and is also working on integrating real-time translation into Android. And Sigmo, a Bluetooth device that promises real time speech translation in 25 languages, went through a successful crowdfunding campaign last year.