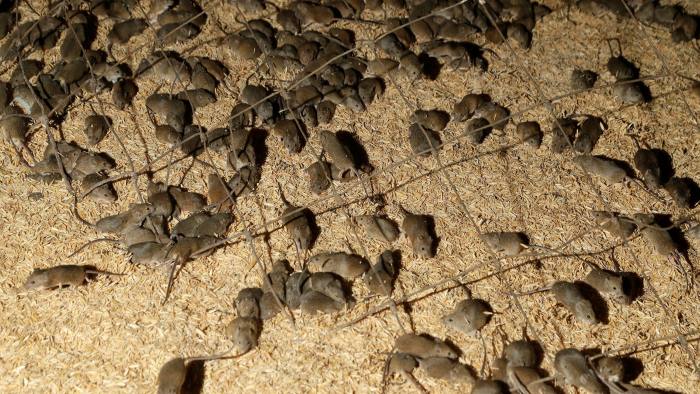 Can you visualize what it would be like to have a plague of mice (or any type of rodent) hit your city or region? Imagine having so many mice that they consume foodstuffs, get into houses and farm properties, die off in vast numbers but still keep coming in large numbers from somewhere. This is exactly what Australians in New South Wales are dealing with right now.

The five links below offer information regarding how severe this plague of mice has become, and there are a number of photographs and video clips of what it looks like when millions of mice descend upon a farmland region. The mice are burrowing into homes, vehicles, barns, etc. in vast numbers. They eat electrical cables and their dead carcasses and feces are polluting wells and water tanks across a broad region of Australia’s rural farmland. The mice are in such vast numbers that they are consuming haystacks and grain stored in silos. Without viewing the videos in these links, you cannot begin to imagine how apocalyptic things now look to many Australians. This is a plague that has to be seen to be believed.

Estimates of the damages already reach to one billion Australian dollars, and many farmers will lose their crops in a large section of New South Wales (in Southeast Australia). Governmental agencies are desperate to find a solution and they are considering the importation of an illegal chemical from India to kill the mice off in vast numbers. However, there are quite logical concerns that this same toxic chemical will also kill Australian wild animals in the region as well as livestock, poultry and household pets. The authorities seem to only have bad options.

The videos remind one of the types of plagues God sent on Egypt in the Exodus account. Those plagues sent upon Egypt included vast numbers of frogs, lice, flies, cattle sickness, boils, hail, locusts, thick darkness, etc. (Exodus 7-10). All of these afflictions are examples of biblically-recorded “plagues” or “pestilences.” Australia’s plague of mice follows recent plagues of historic locust swarms that have hit Africa, the Mideast and South-Central Asia. Those locust swarms caused widespread crop failures as has the mice plague in Australia. In late April, I wrote a post that detailed the food shortages drawing near due to the great mega-drought in the American West. Irrigation water will be in short supply across the American West where farms produce many of the vegetables and fruits we take for granted in American cities. Media reports have told of crop failures in Brazil and China. Crop failures combined with the well-reported supply-chain problems in getting all kinds of products to consumers mean that the world faces a growing risk of food shortages. Some unfortunate areas of the world will face famines and starvation. People driven by hunger will migrate as refugees to other nations, many of which have already lost their willingness or ability to handle any more immigrants. This worsening situation means that the world will inevitably face more refugee crises in the foreseeable future. Food wars will become possible.

The Bible foretold that the latter days of our age that would preceded the return of Jesus Christ would see tremendous traumas and hardships. Matthew 24:7 prophesied wars, famines, pestilences [plagues] and earthquakes as becoming more devastating in the latter days. The term “earthquakes” could apply to all tectonic events, such as volcanoes and oceanic earthquakes that cause tsunamis. Luke 21:25 adds that there will be “signs” in the heavens and that the sea and waves will be “roaring.” When the seas and waves are roaring, it is an apt description of what happens during hurricanes and tsunamis. Revelation 6:1-8 also warns that wars, food shortages, famines and various pestilences will afflict the world in the latter days. Notice especially Revelation 6:5-6 which predicts that food shortages will cause food to be rationed by price. The worsening crop failures in many food-producing regions of the world plus the plagues of locusts and mice in crop-growing regions mean that food shortages are approaching. Indeed, the grain futures markets are at very high historic levels due to the foreseeable food shortages that can now be anticipated. This scenario hasn’t yet mentioned the reduced food production caused by a growing loss of bees and other pollinators, without which many crops cannot be pollinated or produced.

While mice and locusts are certainly “plagues,” the biblical term “plague” or “pestilence” is a very broad term for a situation that causes widespread hardship and death. The global covid pandemic unquestionably helps fulfill the biblical prophecy about pestilences afflicting the world in the latter days. Given that widespread repentance to the Creator God for transgressing his laws is not yet likely, we can expect new plagues and pestilences in the future. Those who have not yet read my article, Are We Living in the Biblical Latter Days? are urged to do so in order to see just how accurate the Bible’s prophecies really are. If you wish to take action to protect yourself, your family and your friends from the upheavals that are starting to befall the earth, please read my article, Should Christians Prepare for Future Hard Times? That article offers biblically-based strategies to prepare for future crises, and its content certainly applies to people of any faith, not just Christians. At some point, there will be no more time to prepare and you will have to “make do” with what you have on hand. Given that fact, why wait any longer to make some prudent preparations for the crises that are coming in our future. What is happening now is only a foretaste of what is to come.