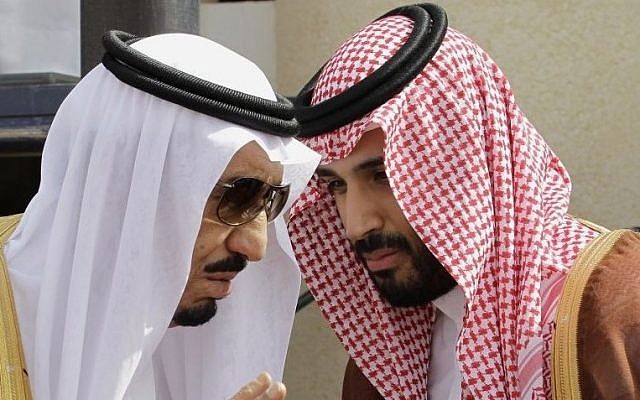 This post is to inform readers about more indications that a Saudi-Israeli peace agreement may be imminent. This blog has been following this emerging relationship for years, and new information has come to light which has prophetic implications that I think readers will find of interest.

The first link reports that the Defense Minister of Saudi Arabia was recently in Israel on a secret visit to pave the way for the normalization of diplomatic relations between Saudi Arabia and Israel. The link cites a source in the United Arab Emirates as revealing that the visit occurred. It is entirely plausible that such a visit occurred as both Israel and Saudi Arabia are very much threatened by Iran, and this common threat is inexorably forcing these two nations together. The obvious question is: What is going to be in the deal?

I especially want to call the attention of readers to the second link which claims to answer this question. It is from an Israeli source that reports an Arabic language media story concerning the details of an imminent Saudi-Israel agreement. The Arabic media source was actually a Hezbollah report that claimed to be leaking secret information about the terms of a pending Saudi-Israeli deal. Hezbollah was clearly trying to sabotage the deal by leaking the issues being discussed in the Saudi-Israeli negotiations. According to this report, the Saudis are offering to have the Palestinians give up their “right of return” demand in exchange for some kind of parity re:nuclear weapons availability for both the Saudis and Israelis. Since the Palestinians have increasingly turned to Iran, the Saudis have little motivation to care any longer about Palestinian interest or desires in these negotiations. What matters is what is good for the Saudis and all their Sunni allies.

There is another supposed portion of the pending Saudi-Israeli deal that readers will, no doubt, find of interest. The second link asserts that that the deal would involve the “ancient city” of Jerusalem being internationalized and given to the UN for administration. It is my assumption that the term “ancient city” means what is commonly called the “Old City” of Jerusalem. There is clearly some hard bargaining going on between the Israelis and the Saudis about the terms of a new Israeli-Saudi agreement. It is my view that while the Israelis truly want an agreement and /or alliance between their two nations, the Saudis truly need a powerful regional ally like the Israelis. In this equation, it is the Saudis who need to yield on some major points to obtain Israeli approval of a deal. Any deal would almost surely need the approval of the Israeli Knesset, and the religious and nationalist parties would greatly object to any deal giving the UN control over the Old City of Jerusalem unless….the deal included a provision for the Israelis to begin building a Third Temple on the Temple Mount. If that was a part of the deal, opposition to the overall deal might evaporate in the Knesset. If the construction of a Jewish Temple is allowed as part of an overall Mideast deal, many biblical prophecies about just such a Temple in the latter days could be ready for fulfillment. It is also possible that the Trump administration is involved with these negotiations between Israel and Saudi Arabia. If so, the USA may be able to broker an agreement that would permit President Trump to have a hugely positive foreign policy triumph with the American, Israeli and Saudi leaders meeting to sign an overall Mideast peace accord which unites the Israelis and Sunni Arabs in a de facto alliance vs. Iran–this would be a very positive outcome for US policy goals. If the Saudis give their approval to such a deal, many other Sunni Muslim nations will sign on to the new relationship. If this happens, I expect Egypt, Jordan, Kuwait, the UAE, Bahrain, the Sudan and other Sunni nations would quickly become part of this overall Mideast accord. You can be very sure Iran does not want this to occur. An overall Mideast accord could also include the Russians as all the nations in the region urgently need to come to some agreement regarding the post-ISIS borders within Syria and Iraq, the post-ISIS status of the Kurds, etc.

We will have to wait to see if such an agreement does occur. I, as usual, will make no predictions about the success of the negotiations currently going on behind closed doors on this topic. At present, I do want readers of this blog to be aware of these apparent behind-the-scenes developments. I will make this observation: If God’s prophetic schedule now calls for such an agreement to develop, it will occur. If we see a comprehensive Mideast Peace Agreement which unites the Israelis and Saudis vs. Iran with American blessings and the Jews are permitted to begin building a Third Temple, we will be entering the “end game” of the latter days on our planet and immense changes will be in the offing. Let’s watch the Mideast closely and see if these Israeli-Saudi negotiations result in such a momentous result or something more modest from a biblical perspective.