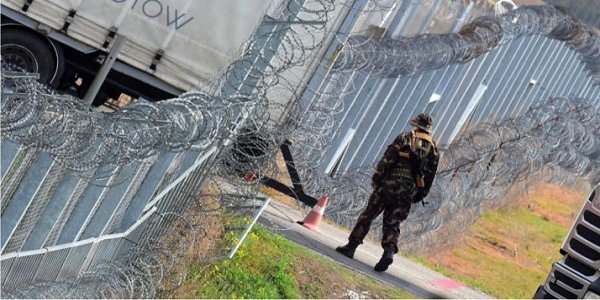 Here in the USA, there is much discussion and controversy about President Trump’s promise to “build a wall” along the USA’s southern border with Mexico to stop the entry of both illegal aliens and illegal drugs coming across the US border. For a long time, US presidents and Congresses of both political parties have turned a blind eye to both dangers and done virtually nothing to secure the USA’s borders. President Trump seems to be genuinely determined to build a security wall across the USA’s southern border during his first term. While the American media’s eyes have been turned inward on just about everything since Trump was elected, another nation just finished a southern border wall to prevent itself from being inundated by unwanted immigrants. That nation is Hungary.

The first link shows what the Hungarian border fence looks like. It was built to stop waves of Islamic immigrants from entering Hungary or passing through Hungary on the way to other EU nations. It features a double barbed-wire equipped metal fence with thermal imaging and other kinds of alarms and detection systems. The Hungarians are serious about stopping Islamic immigrants from coming into Hungary. The cost of the 155 km fence is reported to be $120 million Euros. If the US built a wall like this at a similar cost, a southern border security fence would not cost anywhere near as much as the estimates that I’ve read in some US media stories. Another report on the Hungarian border wall is found in the second link.

Walls can be very effective in halting illegal or unwanted immigration. In ancient times, the Great Wall of China was quite effective at stopping unwanted immigrants from coming into China. Hadrian’s Wall across Britain was long effective during Roman times in keeping people out of Roman Britain. In the modern era, the “Iron Curtain” was quite effective in keeping people from leaving Soviet-dominated Eastern Europe. The new Israeli wall built to keep Palestinian terrorists out of Israel has been remarkably effective, as far as I know. When I was in Israel in August, 2000, I stood at the military border fence between Israel and Hezbollah-dominated southern Lebanon. It featured two tall metal fences, bright nighttime illumination and I assumed the “no man’s land” between the two fences was mined. That border fencing looked very formidable to me.

It would not be hard to build a secure wall across America’s southern border. Fences similar to the one in Hungary, backed by motion-sensors, thermal sensors and 24/7 aerial drones, would be all that is needed to stop both illegal immigrants and illegal drugs from entering the USA via Mexico. The terrain along the US-Mexican border is so forbidding in some areas of the border that a much less imposing fence would suffice. The obstacles to a US border security wall or fence are not technical; they are political as much of the USA’s political establishment is still opposing a wall–for reasons they likely do not want to admit.

The Hungarian fence brings us to the main point of this post: that the EU is slowly being fractured from within. Hungary did not ask the pro-Islamic immigration bureaucrats in Brussels for permission to build their fence to stop Islamic immigration. They did it on their own out of strong nationalistic security interests. Now that Hungary has done this, other European nations may do the same thing. This development confirms that nationalistic drives are starting to overwhelm the desires of the EU to erase national borders and identifications. The British Brexit vote and the recent Dutch and French elections do as well. While the anti-EU populists did not win the elections in either the Netherlands or France, I’m not aware of any poll or analysis that thought the populist parties in either nation would form the new governments there. What is significant is that the populist/rightist parties in the Netherlands and France have now been mainstreamed. They used to be”fringe” parties with very little support; now they are both the primary opposition parties within those two nations.

The EU is one of the many trans-national and supranational entities that were formed or strengthened in recent decades to promote globalism over nationalism. Besides the EU, other globalist entities include the UN, IMF, WTO, BIS, NAFTA, the World Bank and many other such groups. From a biblical perspective, all these globalist entities, in my view, constitute what Revelation 17-18 call “Babylon the Great” (see Revelation 18:3), a supranational elite formed of the “kings of the earth” (global political leaders) and the “merchants of the earth” (huge, multinational corporations and corporate interests). Revelation 18 prophesies that this globalist “Babylon the Great” system will collapse suddenly in the latter days, and Revelation 17 adds that it will be overthrown deliberately by the coordinated action of “seven heads and ten horns” which will establish a new (and final) global system called the “beast” system. Revelation 17-18 tell us what will happen to the current globalist system (it will be overthrown and crushed), but it does not tell us when this will occur in the latter-day prophetic sequence. There are many possible scenarios that could cause the global political-financial-monetary collapse prophesied in Revelation 17-18, and we do not know which one will trigger the fulfillment of this prophecy. All we can do is watch carefully for signs that the current globalist systems are being steadily undermined. The Hungarian border fence, built contrary to the globalist EU desires, is one such sign that the globalist dream of world domination is slowly coming to an end. The election of American nationalist, Donald Trump, is another strong sign of this trend as was the British Brexit vote, via which the United Kingdom voted to secede from the globalist EU to go its own nationalist way in the world.

For much greater detail on the Babylon the Great system, as defined by the Bible, I invite readers to review my articles, Is Babylon the Great about to Fall…Ushering in a New Beast System? and The Babylonian Origin of the Modern Banking System.