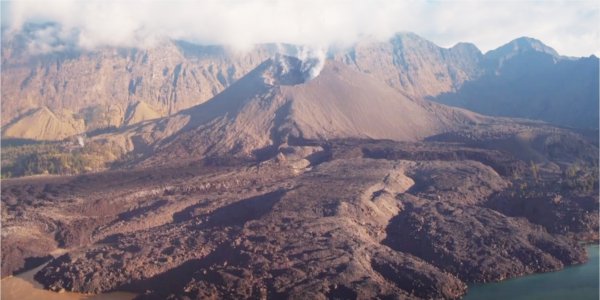 We take it for granted in America and much of the civilized world that the grocery stores will always be full, that our preferred food choices will always be available and we think that that “it can’t happen here” whenever we see stories about famines and starvation in other parts of the world. However, a look at the planet’s geologic history reveals that global food shortages can happen quite suddenly and unexpectedly. Scientific studies and discoveries have linked major super-volcanoes to widespread food shortages all over the world. This happens because super-volcanoes send so much ash into the upper atmosphere that it deflects enough of the sun’s heat to lower global temperatures. This results in shorter growing seasons, and, if the volcano is severe enough, hunger and starvation due to crop failures. A super-volcano is not likely to be predicted. If one happens, it can be expected to happen without any advance warning.

While the eruption of Mt. Pinatubo in the Philippines in 1991 was large enough to lower the earth’s temperature slightly, it was not large enough to qualify as a supervolcano. Supervolcanoes have occurred when Mt. Tambora erupted in Indonesia in 1815 and when Krakatoa erupted in 1883. These eruptions caused global cooling so severe that hunger resulted from crop failures due to the shorter growing season (second link). Europe was hard hit by the 1815 eruption, and that year was dubbed “the year without a summer” in Europe. Snow fell in New York State in June that year. I watched a NOVA documentary on PBS which first aired in October 2017 which examines the threat to global food security caused by super-volcanoes and it focuses on the scientific sleuthing which led to the discovery of what was probably the greatest super\volcano in recent millennia. It was the eruption (and explosive disintegration) of Mt. Samaras in the year 1257 on the Indonesian island of Lombok. That mountain no longer exists and only a caldera remains where the mountain once stood. That eruption caused famines all over Europe and the afore-cited PBS documentary mentions that mass graves in Medieval London indicate perhaps 30% of that city’s population died that year due to the Indonesian supervolcano. I highly recommend that documentary to readers of this blog, and it is attached as the first link. The documentary also noted that most volcanoes affect either just the northern or southern hemispheres, causing food shortages in just the affected hemisphere. However, when a super-volcano occurs in a narrow equatorial region (such as in Indonesia), a super-volcano will affect both hemispheres and famines can then result all over the planet. This would quickly result in global food shortages due to crop failures, and we could again have “a year without a summer.”

The Bible’s prophecies indicate that a supervolcano may be in our planet’s foreseeable future. While discussing the latter days of our age which will precede the return of Jesus Christ and the Millennial Age, combining two prophecies indicates such an occurrence is possible or even likely. Matthew 24:7 prophesies that “famines” and “earthquakes” will characterize the latter days. It is noteworthy that these two conditions are mentioned together in the same verse. Does one event cause the other event? The Greek word translated “earthquake” in Matthew 24:7 is “seismos,” meaning “a shaking.” We derive the word “seismic” from this Greek word, and that includes all kinds of seismic events, including volcanoes. The prophecy in Matthew 24:7 can include all types of seismic events. Earthquakes can be very damaging, but even damaging earthquakes do not cause global food shortages. However, we know a megavolcano can cause a global food shortage. Revelation 6:5-6 also prophesies that food shortages will occur at the end of our age, and that food will be rationed by price. Since the book of Revelation addresses global conditions affecting mankind at the end of our age, the food shortage foretold in Revelation 6:5-6 is almost surely a global food shortage, which can be caused by a known seismic event: the supervolcano.

Science cannot yet predict the location and severity of volcanoes. Foreshocks may indicate one could be imminent, but it is an uncertain science. If you are a believer in the Bible, it forewarns you that food shortages and seismic events are certain to occur in the latter days. Have you made any advance preparations for such events? Indeed, one hardly needs a biblical warning to know that many types of weather conditions such as droughts, floods, hurricanes, tornadoes, ice storms,  etc. can lead to localized food shortages, power outages, access problems, etc. Such events as these occur every year all over the globe in various locations. Prudent people make preparation for their families’ needs in the event such events strike. During my lifetime in the Midwest of the USA, I’ve experienced many floods, seen a number of tornadoes, and experienced several severe ice-storms. I recall, as a child, huddling around a non-electric heater with my family in the winter for warmth and eating whatever food was available when ice-storms cut off electricity for days. The power grid is more reliable today, but it can still be taken down locally or regionally by major weather events. In our modern time, we have been warned that an electromagnetic pulse (EMP) event–caused by the sun or by a nuclear detonation–could end electric service for many months and cause widespread deaths. Terrorism has also been cited as a possible cause for a power grid failure. It is reasonable for all people, not just believers in the Bible, to prepare for such weather or atmospheric disasters in advance of their occurrence. If you do not make advance preparations, it will be too late to do so once a major disaster strikes. I urge readers to review my articles, Should Christians Prepare for Future Hard Times? and Are We Living in the Biblical Latter Days?

If, at some point in the future, you hear on news media reports that a huge volcano erupted in the earth’s near-equatorial region (such as in Indonesia or the Philippines), take quick notice of the severity and location of the volcano. Indonesia has produced three supervolcanoes in the last millennium (Samaras, Tambura, and Krakatoa) so a massive volcano in that same region could again plunge the world into a cooler atmosphere–causing food shortages due to the shortened growing season where crops cannot mature. If a huge volcano erupts far from the equatorial region, it will predictably affect growing seasons in either the northern or southern hemispheres, but not both of them. This would result in a more limited food shortage as one hemisphere would still produce normal harvests. Such a volcano could fulfill the prophecies of Matthew 24:7 and Revelation 6:5-6, but a supervolcano along the equatorial region of the earth is likely to kill many millions of people all over the earth due to widespread famine. Food shortages triggered by a supervolcano could cause food shortages for years before enough volcanic ash falls from the upper atmosphere to allow normal growing seasons to be reinstated on the earth’s surface. I don’t think anyone can fully prepare for such an event, but have you made any precautionary efforts to safeguard yourself and family when/if such an event happens?

One final note: the greatest known supervolcano ever documented (Mt. Samaras) occurred in 1257 AD on the Indonesian island of Lombok. In 2018, the island of Lombok again became seismically active with a series of earthquakes killing hundreds of people (third link). Is this a prelude to another possible supervolcano in that region? The PBS documentary cites scientific thought that the island’s seismic pressures were so vented in 1257 AD that another supervolcano on that island is unlikely. However, none of us can say for sure.