51% of Italians Ready to Leave the EU 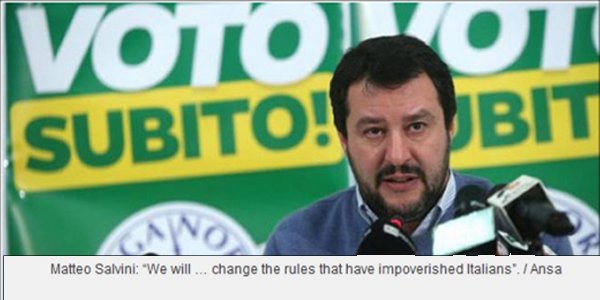 The news from Europe keeps getting ever-more important, even as the American media largely continues to ignore the news that really matters. The Italian election vote is reverberating across Europe. The first link cites a recent study indicating that 51% of Italians are ready to leave the EU. I don’t know how “recent” that study was, but I suspect that the current number is actually higher, given that approximately 70% of all Italians voted for Euro-skeptic parties in the recent election. The defeat of the pro-EU forces in Italy can hardly be overstated. The first link also cites the statements of the leaders of the political parties that won the Italian election, and those who favor a centralized EU ought to be very worried. One leader praised the UK’s Brexit vote, and another indicated that if he were Italy’s new Prime Minister, he would “close mosques, strengthen Italy’s borders and take sovereignty back from the EU.”

The second link reveals a huge disconnect between the Italian voters and the pro-EU leaders. One pro-EU leader said it would take years for Italy to leave the EU, but a spokesperson for one of the winning Euro-skeptic parties is quoted as saying, “The EU and the Euro, in particular, are a threat to the Italian economy.” Did you notice he stated the Euro currency itself was a threat to Italy’s economy? I think Italy presents the EU with a greater threat than did the United Kingdom’s decision to leave the EU. While the UK voted to leave the EU, it did not leave the Eurozone because it was not in the Eurozone. However, if Italy leaves both the EU and the Eurozone (and returns to its own Lira currency), it will cause a major crisis in the Eurozone. If a new Italian government decides to abandon the Euro, it will raise huge questions about what percentage of the Euro’s debts and assets would be transferred to Italy, and what percentage of both would remain with the EU. If a major European nation like Italy decides to leave the EU and/or the Euro, a number of smaller nations might follow in Italy’s wake. Then the Euro currency would face a dire and perhaps existential threat. As I have observed in a variety of previous posts, if the Euro currency breaks apart, it will trigger a global financial crisis so huge that it could fulfill the prophecy in Revelation 17-18 that a global financial/monetary system in the latter days of our age will collapse suddenly in some kind of global crisis. It would not take a great deal of financial pressure to cause a sudden seize-up of the gargantuan derivatives market due to counterparty risk. If the solvency of the Euro is put in jeopardy, then all debts, trade deals, derivatives, bank deposits, etc. denominated in Euros are of uncertain value. The arrogant EU leaders who wish to impose a centralized (and unelected) EU autocracy on the continent of Europe may not realize that they are playing with fire. The more they push for a centralized EU, the more they push the European nations toward nationalistic, anti-EU stances.

There is no minimizing how greatly the lax immigration policies of the EU have caused nationalist sentiment to skyrocket among Europe’s voters. Yet there is still no solution in the offing for the immigration crisis eroding the EU’s foundations. How bad could this crisis get? It could get much worse. The third link, written last year, warned that one million African immigrants were somewhere en route to Europe. The fourth link, also written last year, warned that 6.6 million immigrants may be ready to flood into Europe from Africa, the Mideast and Asia. Of that number, about half were Islamic immigrants waiting in Turkey to get into Europe and the other half were Africans poised to get into Europe any way they could. It also reports that conditions in the detention camps in Libya where many immigrants wait for a turn to be floated or smuggled into Europe somehow are deplorable. It adds that “killing, rape and torture” are commonplace in these camps. This begs an obvious question. Where do the rapists, killers and torturers go when they leave those camps? Obviously, they go to Europe, hidden amidst the human tidal wave of immigrants desperately seeking to impose themselves upon an increasingly unwelcoming European population.

The fifth link is a very recent report that, in light of the anti-EU, anti-immigrant Italian elections, Hungary, Austria and Italy, in league with other Visegrad Four nations (Poland, The Czech Republic and Slovakia) may form an anti-immigrant alliance within the EU. One of the reasons cited for these nations taking such action is to preserve their Christian European culture. I think this is one reason why the EU’s leaders are so out-of-touch with Europe’s population. The EU’s elites lost their faith in God long ago so they have a barely-concealed contemptuous attitude toward those who still have Christian faith. Having lost their own faith, the elites have no concept of what faith means to people who still have faith in something.

The fifth link has a very revealing photograph about the state of Europe’s immigration crisis. Look at the photo of a badly overcrowded boat full of people wanting to smuggle themselves into Europe via any way possible. Do you see any women in that boat? I don’t. Do you see any children on that boat? I don’t. Do you see any obvious Islamic clothing on these people? I don’t. This boat’s occupants seem to all be males from West Africa who are traveling alone. Clearly, as many people as possible are trying to pour into Europe while Europe is frozen in a state of self-destructive immigration policies. I don’t know when that photo was taken, but it was likely before the Italian election. The number of illegals on that boat most likely caused ten times that number of Italian voters to vote for Euro-skeptic, anti-immigrant parties. With each such boatload entering Italy, the odds of Italy leaving the EU and the Eurozone steadily grow greater.

For more information on the biblical topic mentioned above, please read my articles, Is Babylon the Great about to Fall…Ushering in a New Beast System? and The Babylonian Origin of the Modern Banking System.