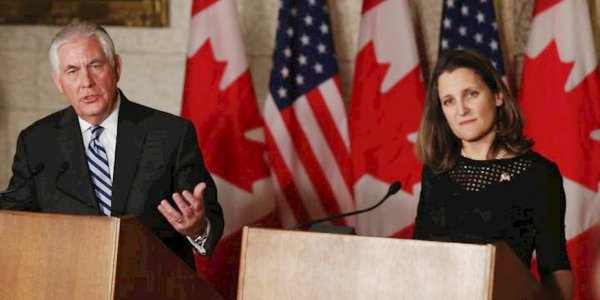 In an event that was, in my opinion, greatly under-reported in the USA, the twenty nations that contributed troops to fight North Korea in the 1950-53 Korean war met again to form a common strategy to accomplish the removal of nuclear weapons from the North Korean government. Today’s links note that the Foreign Ministers of these nations agreed that the only acceptable outcome to the current crisis is the “denuclearization of the Korean Peninsula.” The meeting, hosted by Canada in Vancouver, British Columbia, was very auspicious as China and Russia were specifically not invited to the meeting.

The only nations invited to the meeting were those which were “sending states” (first link) in terms of sending military forces to fight under the auspices of the UN Security Council action against North Korea in the 1950s. Many people tend to forget that, technically, these nations are still at war with North Korea as the Korean War’s fighting was halted by an armistice or ceasefire, not any formal peace treaty.  In other words, fighting there was merely suspended in 1953, not formally ended. That these twenty combatant nations agreed to assemble to assess the current crisis in Korea reminds the world that the UN Security Council action vs. North Korea is still in force and can be activated by all or some of these twenty nations at any time if necessary. The first two links include maps showing which twenty nations were part of this alliance in 1950-53 when the Korean fighting was “frozen in place” by the cease-fire in 1953.

The second link cites the Japanese Foreign Minister as saying that the “charm offensive” by the North Koreans regarding the pending Winter Olympic Games in South Korea is really intended “to buy some time to continue their nuclear and missile programs.” I think he is totally correct in that assessment.

I heard a mention by the BBC-TV world news (as broadcast on the USA’s PBS channel) that there is still a technical “state of war” in effect on the Korean Peninsula. That reality begs some very important questions. These twenty nations were fighting not just the North Koreans but also the Chinese military forces when the Korean War hostilities stopped. Are these twenty nations technically still at war with China as well? The answer to that question may be “yes,” which explains why China was not allowed to attend this important meeting about the future of the Korean peninsula. There is also another very important question: If a state of war still technically exists, can either side re-start the war at any time without notice? The answer is likely “yes.” This allows for the possibility that North Korea fully intends to re-start the Korean War when it is convinced it has its own nuclear deterrent in place. This possibility highlights why it is so important to quickly find a way to rid North Korea of its nuclear weapons via diplomacy and severe sanctions. Imposing a full naval blockade of North Korea is about the only step left before open warfare will be required to “denuclearize the Korean Peninsula.”

The final link notes that US Defense Secretary Jim Mattis was at the Vancouver meeting, and announced the USA has a war plan ready to implement if a peaceful resolution of the Korean crisis is not found. He added the next step, if necessary, would be to call a meeting of the Defense Ministers of the 20 nation group that just met in Vancouver. That meeting would determine how many of those twenty nations are ready to go into action again.

As I noted in a recent post, “time is running out” to find any peaceful solution to this crisis. North Korea is surely using the Olympic Games to buy time to push its nuclear program into operational status for attacking the USA. The USA and its allies cannot allow North Korean to reach that level of readiness for war.